What are the typical nest placements of Yukon?

I've been trying to play on Yukon, but I haven't had much luck yet in joining a team that didn't get steamrolled by the other team. Large areas full of rocks and other nasty things, many small tight tunnels that connect each of this areas to the other, this seems like paradise for spam of all kind. People who wish to take the point back have to wrestle through the spies and demomen and pyros and heavies and scouts in the enclosed areas, and when they're done they have to face longer range harassment from soldiers and snipers and demomen still, with the rocks favoring ambushes for the other closer range classes.

It seems the map is aggressively designed against defense: lose the middle point and you can already think about the next round. It doesn't help that you always spawn from the farthest spawn point unless you own middle.

So that brings in the picture engineers and their teleports, pushing the team forward. Thing is, while metal is abundant on the map, I can't for the life of me find a decent nest location. I can imagine hiding teleporters around one of the corners can be effective on defense, but that's it. Every place I've looked at seems either too exposed or too ambushable. Do I have to gunslinger here, or are there nests I just can't see?

Being on the wrong end of the game, the only effective placement I've seen so far is on the sloped side of the second point, when the enemy is down to their last point: 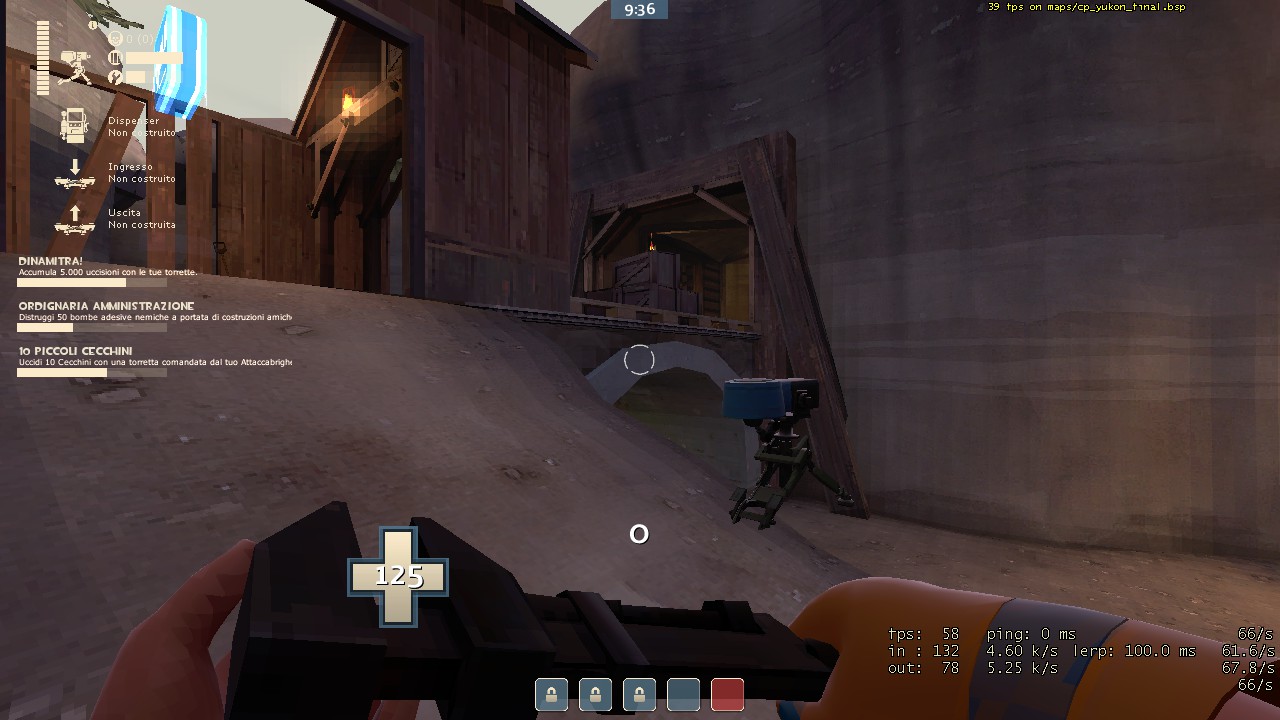 Is that all? What are the typical nest placements in Yukon?

Yukon was intentionally designed to be harder for Engineers:

This abandoned mountaintop coalmine was repurposed by shadowy operatives into a top secret surveillance outpost—one which also, so nobody gets wise, insidiously continues to mine coal. There is also a log hanging in the center of the map—possibly as an example to other logs. Logs that said too much.

Five control points promise a lot of momentum swings in this compact outdoor map, with plenty of tunnels and rocky outcroppings. Plenty of alternate routes ensure that if you can’t get past a well-placed engineer through one tunnel, you might be able to sneak up behind them through another.

Point 1 is extremely poor for defending as Engineer.

If you're building full size sentries, it may be better to build them down in the pit, although that means a Spy can back-cap the point.

Point 2 has a few defense spots. One of the best for actually covering the point is at your team's end of the hall when you first come out the door from point 1. You had better have the Wrangler, though, or a sniper at the far end of the can easily take you out.

Another point is past point 2, on the middle route. You can place a sentry on the walkway up. The problem is that, if you place is close enough to the point to be able to see it, it's far enough from the point 3 area for Demomen to be able to take it out.

Building slightly to the enemy's side of point 4 works pretty well, as it covers both entrances to the point 4 area.

Due to the difficultly in guarding points with a level 3 gun on this map, Mini-sentries work fairly well on it, at least when combined with the Frontier Justice.

Not the answer you're looking for? Browse other questions tagged team-fortress-2 tf2-engineer .

6
What's the range of the wrangler?
3
Does the Frontier Justice get revenge crits when Combat Sentries are destroyed?
22
What are the vintage items?
20
What is the optimal position of a sentry gun?
9
2fort: Sentry at the intel, or at the spawn?
9
How to capture the last point in Junction?
5
How to kill Merasmus, and where are the typical prop spawn points?
3
What building(s) should I save in the event of any enemy ubercharge?
7
What are the advantages of using the Wrangler?
4
What are the unusual weapons?