Is there a limit to how many people you can block on Steam?

Steam limits the number of friends you can have, but I am uncertain if there is a limit on how many people you can block.

I tried to google it, but information I found was conflicting. Some said it was infinite, others said it was 500, again others said it depended on the Steam Level. However, none of those were from official sources and merely sounded like best guesses.

So is there a limit on how many people you can block on Steam?

An official response from Steam Support: 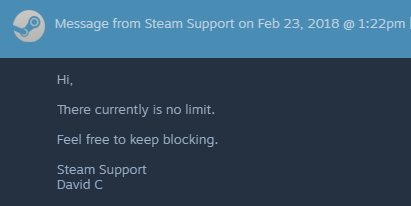 There is no limit to how many you can block. I have blocked over 500 people.

15
How can you install Steam games offline?
6
Can you download Steam Platform Updates without the Steam Client
2
Can I report people on Steam for sending inappropriate messages?
29
How many levels are there for Steam Trading Card badges?
5
Do people on Steam see my non-steam games?
27
How many friend slots do you start off with, and how many do you get per Steam level?
3
Is there a limit of steam cards per day
3
Is there a program to limit access to Steam?
3
Can you use Steam music using only the Steam overlay?