How should our glorious civilization incorporate two neighboring fallen empires?

Behold the pure, the glorious, the powerful civilization of the Till Lynesi Star Hunters. We are, without question, the foremost active power in the galaxy in the 23rd century and we will not allow any filthy xenos to contaminate the cosmos, as the divine commands us to ensure. Our neighbors rue the day they achieved sentience as we annihilate their fleets and secure their worlds so we can cleanse them and ensure no additional infestations occur. 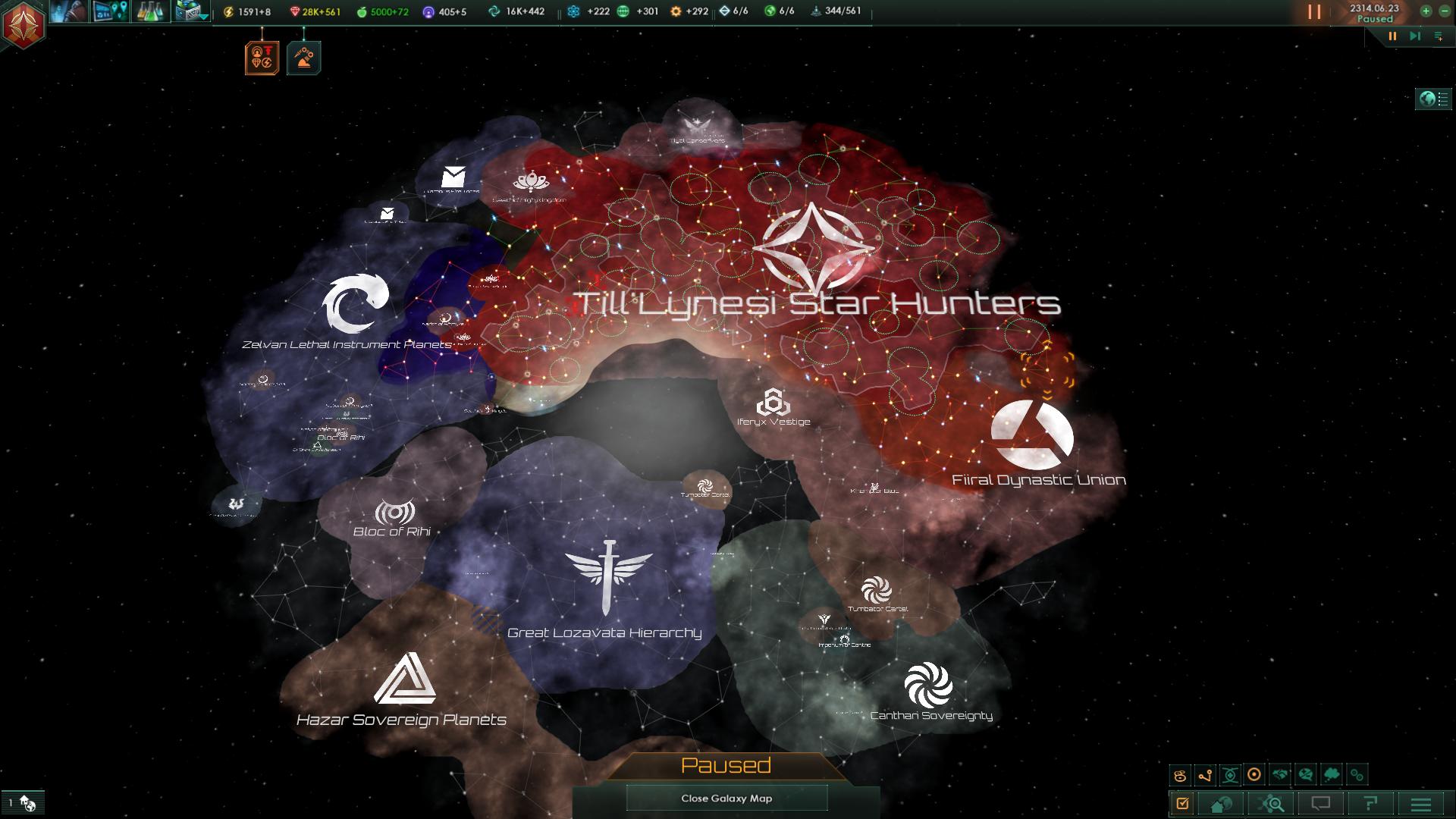 While most other empires chafe but eventually cower at our spiritual mandate to fanatically purify the galaxy, there are two ancient empires bordering our glorious realm that appear... indifferent to our strength and tolerant of our presence. 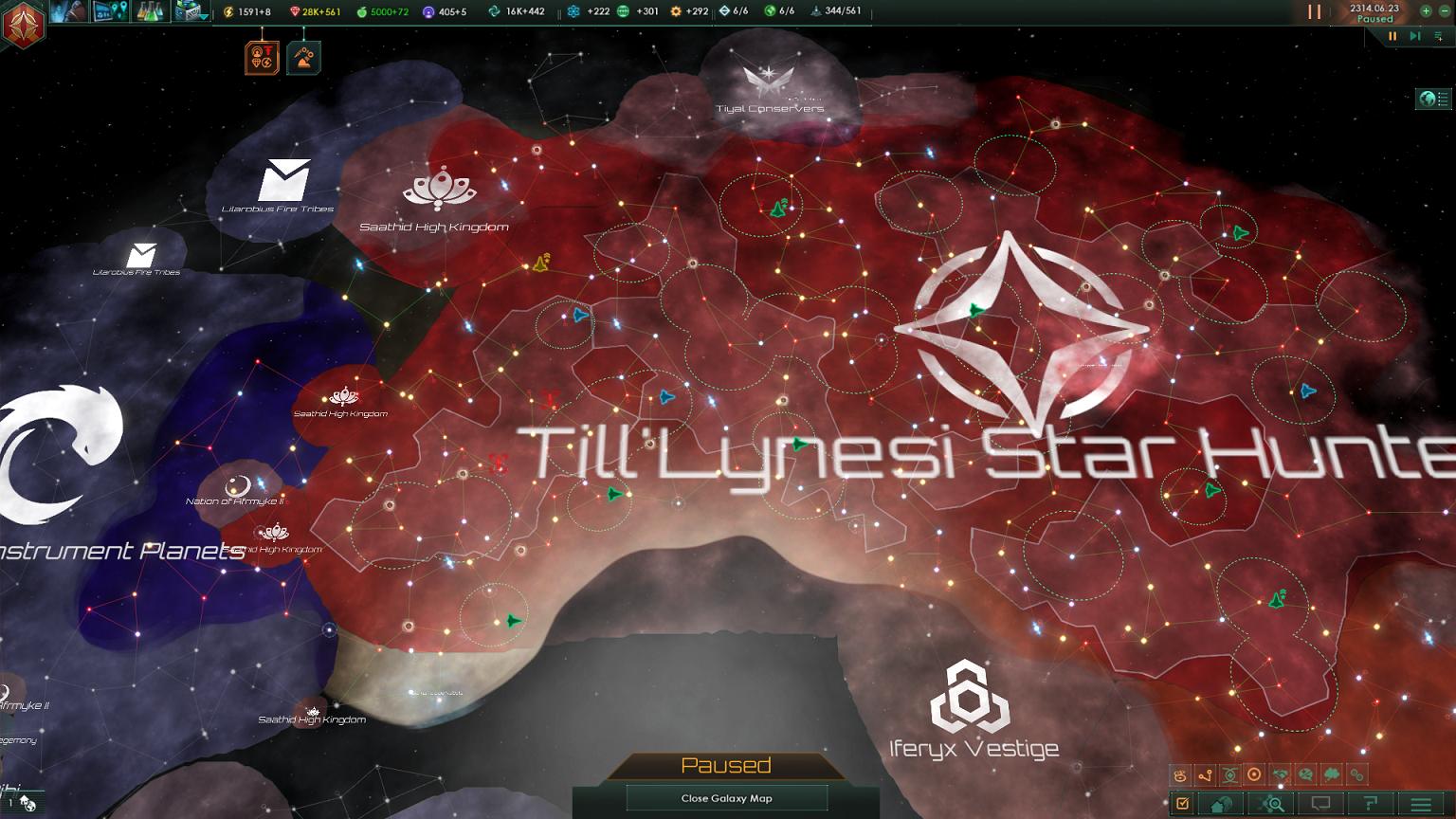 Except for energy, our economy is pretty robust, although we can float on an energy deficit when we undock the imperial fleet because we have tons of influence and not a whole lot to spend it on. In particular, our sectors generate a lot of energy that they don't use which we can cash in on even when they already send 75% of their income to the core systems, and we have a few decent planets for capacity overload. Also, the Energy Nexus technology (Planetary Powergrid) is only 8 months away which should certainly help out, plus one or two other energy-related technologies we could begin researching. Since we can't tolerate any filthy xenos, trading for energy or entering into any other form of negotiation is not possible.

Our military technology is robust as we progress towards our desired ship designs. Starting with missiles (currently T4), we've begun switching over to cruisers with Neutron Torpedoes and T3 Plasma Cannons. We have initial point defense systems and improved bombers to flesh out our offensive designs. Defenses include T4 shields and power cores with T3 armor and shield capacitors. We're currently focusing on building these cruisers, when we decide to build any ships at all. 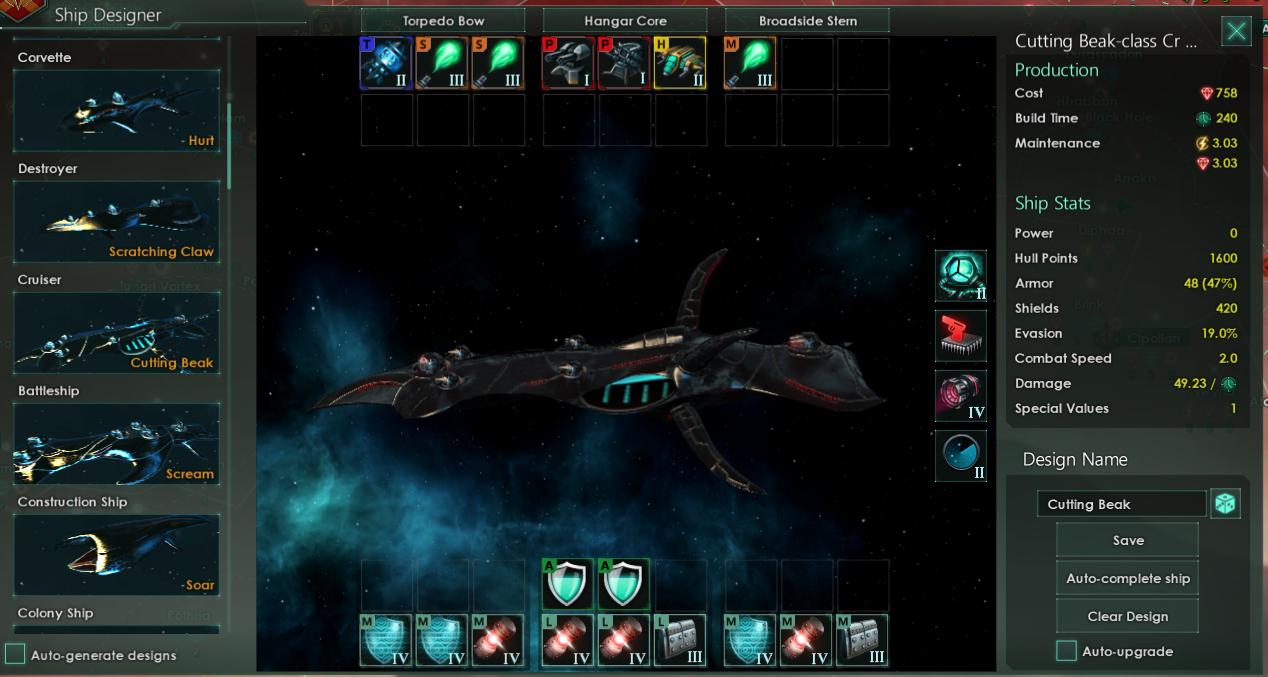 While we can design battleships, the designs are still early, lacking X-size weapons and long-range artillery. We can fill out a battleship with Missiles, Plasma, or T3 railguns, but that's about it. Alternatively, we could build dedicated carriers, but we've declined to build any battleship designs so far.

Long-term, we are embracing the Worm as it desires us, and progressing onto the path of psionic ascendancy, but both of those are many years away.

As you can see, our fleet capacity is far greater than what we've allocated to ships currently as we are keen not to attract the notice of one of the Fallen Empires by building too large of a military presence. As such, we're only at 344/561 for 39k fleet power. However, we've capped out our mineral stores at 28k and earn over 500 minerals a month, so we can grow our fleet quite quickly. We'd really, really, really like to avoid awakening either Fallen Empire, but especially the northern one, as the only real places for these empires to expand into is our territory. We're also mindful that conquering one empire could provoke the other one into action and that any campaign we initiate could be quite expensive. If we were to awaken one of the empires, or worse - trigger a War in Heaven, we'd expect the consequences to be devastating.

So our goal here is simple: conquer both Fallen Empires before they awaken. How should we proceed to incorporate the worlds of these Fallen Empires into our domain so we may decontaminate these systems and protect them from other xenos that might show interest in them?

This will be fairly hard to do. First of all, you trigger the awakening process by getting over 50k fleet power, but this then has a MTTH of 50 years (i.e. the monthly chance of triggering an awakening is 1/600). This is halved if your fleet power exceeds 75k. So you can fairly safely build up to 74k fleet power.

If you were to conquer a fallen empire world, the MTTH gets cut by 90%, so it will happen within a few years of game time.

Also for a fallen empire to awaken, their total fleet power must be above 40k.

As such, your best bet would be to declare war against the stronger empire, annihilate their fleet, but do not conquer the worlds. Keep them in check, then declare war against the other empire, destroy their fleet and then conquer both their worlds. This will be very hard even with 74k fleet power and it is pretty much guaranteed that another fallen empire in the galaxy (if there is another) will awaken very quickly.

On top of Dulkan's fine answer, I would like to add that until war breaks out with those Fallen Empires, there is one thing your should work on with high priority:

At some point, you will need to quickly increase the size of your Navy, to maximum size. Given your current 344/561, that would be a near doubling.

Given that fielding your Navy already causes a negative balance right now, that will be near impossible to pull off. Even a reserve of several thousand energy credits will quickly disappear facing a monthly deficit of 100 energy or more!

You wrote you are already working on it; Good!

There is no such thing as too much energy.

If you ever find your energy maxed out with a healthy monthly surplus, just terraform some planet.

I also noticed you have several unclaimed areas next to your borders, and you have +5 influence every month. Therefore I would suggest to build a couple of Frontier Outposts to claim those areas.

This will increase your research and minerals income without increasing research costs. A quick and easy gain!

Also, there are several smaller empires next to you. Why not attack one of them with a very limited war goal of one planet and the destruction of nearby Frontier Outposts?

The main goal of those short wars is to open up new areas for your Frontier Outposts and Colonies, which results in an increased research income.

The truce after winning the war can be used to scout their planets, and temporarily access the unclaimed areas beyond their area.

In practice, your neighbors likely have a defense pact. Still, their fleets usually can be defeated one by one if they are on opposite sides of you.

Swiftness of execution is key here; You don't want the war to last long. Even White Peace is acceptable once you destroyed those Frontier Outposts with your fleet.

Those skirmishes usually provide a nice boost to the weapon systems you haven't specialized into yet - lasers and cannons.

By the way, why do you tolerate those pirates / drone miners / other aliens in your area? I see are two red [!]s in your area - Get rid of those filthy xenos! [EDIT: Apparently - see comments - those two are too strong. The weak ones have been eliminated :) ]

8
How much does Assist Research actually help?
0
How to get over this one little last bit of acceptance lack to actually use diplomacy for anything?