What are all of the ways to raise/lower a city's loyalty?

What are all the ways a city's loyalty can be raised and lowered so that I (and others) may form strategies around this mechanic?

Loyalty is improved in the following ways (Will add more as I find them),

I found this information in-game on the city panel (loyalty page). 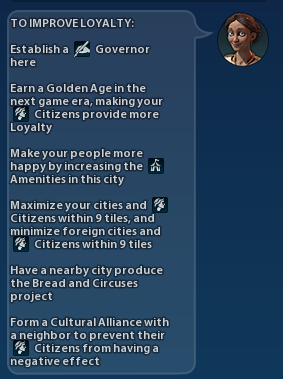 4
What are all of the emergency triggers?
1
As Mapuche, does capturing a civilian unit lower enemy loyalty?
2
What use are Great Prophet points if you already have a religion?
3
What unlocks the three final Government Plaza buildings?
3
What advantages does the Water Park have over an Entertainment district?