I'm regent for my king, now what?

I am an 'independent count' (ie my direct liege is the King) in the Kingdom of Lombardy. The honorary title designated regent should give me a positive modifier with my king (+10), and probably prestige.

However, my liege, the King of Lombardy, went into hiding and so I am acting as regent.

From regencies I've had I am aware that one's regent has to agree with decision/actions- sending money, declaring war, etc. 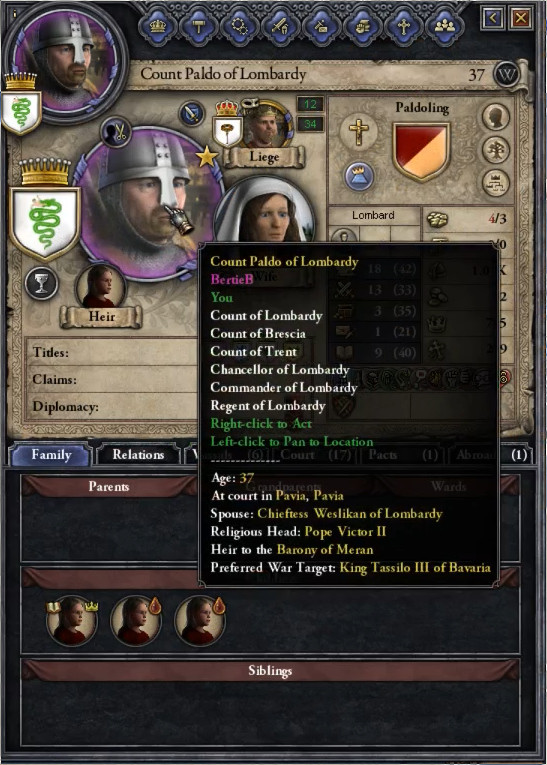 The wiki page for regency deals mainly with the issue of selecting and having an AI character regent. It does have to say the following:

But it isn't clear if any or all of these apply to a player regent.

What powers, effects or decisions does being regent give me?

Note: I don't have Conclave DLC, but I am interested in effects that are in play either with Conclave or without.

You don't get any powers or any decision to carry out any of those things.

However there are events for all of those which can be triggered depending on a number of factors and sheer dumb luck. At the same time, your charge can get the event to charge at you with a wooden horse and kill you by pushing you off the balcony.

You can find the full list of events here. You can then proceed to looking them up in the events file and find the triggering conditions for each one of them.

16
What is the point of duchies if you're king?
15
Can I disown my heir?
6
What if a king is also a duke in a different kingdom?
8
What is the most effective way to spread the Norse faith in Crusader King 2?
6
CK2 - Can a king be the vassal of another king?
3
Super-Duke vassals vs. King vassals in Crusader Kings 2
2
Needs to be approved by regent?
5
What determines if a vassal king desires an empire
3
How do I have my king fight in battles?
1
How to become a king of a friendly dynastic kingdom?