When I use alt+tab on a fullscreen game to go back to the Desktop in Windows 10, most of the time the screen goes black. It doesn't happen all the time which is makes this even more confusing. It also turns black sometimes after exiting the game. I have a single monitor and an Nvidia Graphics card. Some things I've found about this:

It has happened to me in the games Overwatch, Destiny2, DragonAge Origins and the Final Fantasy XV Demo, so I'm pretty sure it's a general error when going fullscreen.

Is there a way to solve this?

Update Here are the things I've tried and haven't worked:

Edit 2018-12-18 It's been a long time since I asked this question. Both Windows 10 and Nvidia Drivers had several updates since then and now I don't have this problem anymore. But I did used fullscreen windowed mode when available until I found the problem fixed itself so I'll mark that as the answer.

You can fix this by running the game in full-screen windowed mode, instead of running it in full-screen. The difference here is that you might lose out a tiny bit on high graphic games. When a game runs in full screen, it occupies the whole of grapic card power, leaving none to the Host OS, While in full screen windowed mode, the game loses out a bit on the "exclusive mode" & graphical interface.

Another solution is not to fix the alt + tab, but instead to use a different solution:

Doing this on windows 10 is easier than on windows 7/8/XP, since windows 10 has this feature built in. First you must create a new desktop.

Using a OS that is XP or above

Since Windows XP/7/8/8.1 don't have this function built in, you will have to use the Microsoft Systernals Desktops program to achieve this. Go to this website and use the given program to create virtual desktops.

For Nvidia: Setting Scaling tab to No Scaling under Adjust Desktop Size and Position in Nvidia Control Panel fixed this behavior for me.

It was set to Aspect Ratio previously

I experienced the issue on my Windows 10 installation with an AMD Raedon RX 580.

I managed to get it working by enabling

in the RAEDON SETTINGS at the Display panel. Interestingly, it continued to work even if I disable it afterwards again. 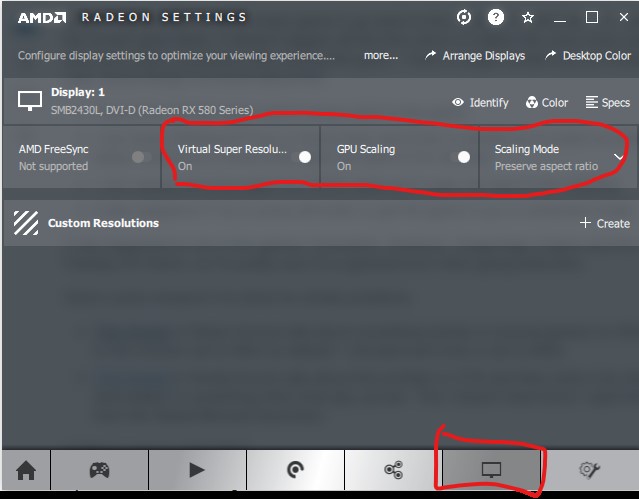 This is common among some games. I've noticed that more powerful CPU's don't get this issue as often as weaker ones since alt tabbing is pure multitasking.

If it doesn't work, you can check this thread with multiple solutions that worked for each specific user/scenario.

Good luck! I had the same issue on the previous PC and the refresh rate was the problem.

After reading, and trying 100 different things i fixed it on my own. For me anyway. Right click , Display settings , click Advance scaling settings and disable it. After a month of frustration that fixed it for me.

I had the same problem and tried out with my Amd settings and got it fixed :)

How to fix it for AMD users

How to fix it: Turn off this setting(10-Bit-Pixelformat) and restart your pc and youre done :)

Fix for me was to make sure the refresh rate matches between desktop and game.

It probably applies to resolution too.

Somehow this Option is activated per default after installing the latest NVIDIA Driver, but is shown as disabled (checkbox not marked).

Not the answer you're looking for? Browse other questions tagged graphics-card windows-10 .

9
How can I fix old games being run in portrait mode on my Windows tablet?
23
Windows 10: Taskbar will be in front of fullscreen games
2
What with the Windows Gamebar compatibility limitations?
0
How do I fix this black border problem in games
6
Red Dead Redemption 2 on PC Flash to Desktop Bug