How to counter Catholic holy orders as a Germanic?

I am playing Iron Man Jarldom of Sjælland Kingdom of Denmark from the Old God's start. My self-imposed goal is to spread the (reformed) Germanic faith as wide as possible and make it the dominant religion in Europe until the end of the game.

My first attempt failed. I am now in my second attempt. The year is 945 and I am running into the same issues I had in the first. Everything goes well until the early 900s. I reformed the Germanic faith and me and my allies from the Scandinavian region made good territorial gains in England, Germany and Poland. But when the Catholics receive their holy orders, everything changes. Now every little Catholic duke keeps surprising us by conjuring up 4000-9000 soldier armies of heavy cavalry and heavy infantry which tear through our armies like paper. And don't even get me started about that crusade for Pomerania where the pope showed up with his 20k army totally thrashing me, my vassals and my allies.

In my last game I converted to Feudalism which was the start of the end, so I am wary of doing it again. In my current game I am still tribal.

I think I am supposed to have at least one holy order of my own (the Jomsvikings) but for some reason they refuse to spawn even though I think I fulfill the requirements listed on the Paradox wiki Update: 20 years later the Jomvikings finally spawned. Let's see how much of adifference they make.

What can I do to stand a chance against the holy orders and prevent being steamrolled by the Catholic kingdoms in central Europe?

After playing my current game for some more time I think I understood the mechanics of holy orders well enough to answer my own question. These are some of the lessons learned:

Do not wait to convert to Feudalism

Yes, you will become a lot weaker the moment you convert from Tribal to Feudal. Not only do your troops take a huge dip and your councillors can no longer perform the jobs which cause small armies to spawn in your capital, you also lose the ability to instantly raise 2.5k tribal armies for 500 prestige each.

But if you survive the transition, you will soon become far stronger than you could ever be as a tribal ruler. After a few upgrades, your castles will spawn more and most of all better troops than before. Pay special attention to the Housecarl Training Ground upgrade. The attack bonus it provides applies to all heavy infantry from that castle, not just the housecarls themselves. This makes your heavy infantry extremely deadly during the melee phase of battles, especially when you got a good commander with the Heavy Infantry Leader trait.

Also don't forget that as a Germanic Pagan you can still raid even after you became feudal. You can even raise your vassal levies as raiders. You will not get a "raised troops" opinion penalty as long as the troops are set to loot and you are at peace. So keep on raiding to finance your castle upgrades and build a money buffer from which you can hire some mercenaries if you need them. An additional positive side-effect of raiding is that you can use raiders to decimate the enemy troops without them hiring any holy orders or attacking your homelands like they would in an official war.

Keep track of what the holy orders are doing

Holy orders can only join one war at a time. So when someone else hired them, or when they are landed and got into a war of their own, then your enemy can not hire them too. So you should strike when most holy orders are occupied elsewhere. A great opportunity are crusades, because holy orders will almost always join them. Just keep in mind that the enemy can hire the orders as soon as their current war is over.

Also note that holy orders replenish their troops over time. So when they just fought a hard war, they will usually be below their nominal strength.

To find out what a holy order is doing, look up their names on the wiki, enter them into the "find title or region" window (button below the minimap) and click the portrait of their grandmaster. You can also mark the grandmasters as special interest characters so you get a message when they join or complete wars.

Hit them the moment they get hired

When someone hires a holy order, that order will spawn in their capital (or nearby if there are troops present). When they spawn, they will be at 0% moral. So your first strategic objective in any war against an enemy which might recruit holy orders is to rush to their capital and attack the order the moment they spawn. This is especially effective if you are playing without the Shattered Retreat mechanic, because you can then keep hunting the order across the map until they are completely destroyed, even when you have less troops than they do.

The same strategy works on mercenary companies, by the way.

While mercs are practically unaffordable as a tribal, your improved income as a feudal should be enough to hire one or two mercenary companies and maintain them long enough to throw them against a holy order. Make sure you always maintain a cash reserve so you can do that in case of emergency.

While holy orders are pretty overpowered for 10th century standards, they don't become any stronger over the course of the game. When you upgraded your own holdings so far that each of them can spawn a 4-digit army on its own then holy orders become a lot less scary.

So you should spend most of the 10th century turtling. Focus on improving the counties you have than on capturing new ones.

When an AI considers to declare war on you, they will compare their troops to yours without considering how many additional troops each of you could theoretically hire. So if you want to avoid getting holy-warred into submission, keep your troop count high. Do not start any foolish wars. If you get attacked by a superior enemy, consider to not raise any troops. Better to sit it out and let them win through sieges than to sacrifice all your troops (and maybe even your emergency mercenary fund), lose anyway and then be an easy target for even more wars.

They made quite a difference in those wars in which I was able to hire them. Unfortunately most of the time I couldn't. Their first grandmaster was quite ambitious and spent most of his time conquering a realm of his own, while his successors spent most of theirs defending said realm against attackers. Anyway, at least they kept some of my enemies busy. 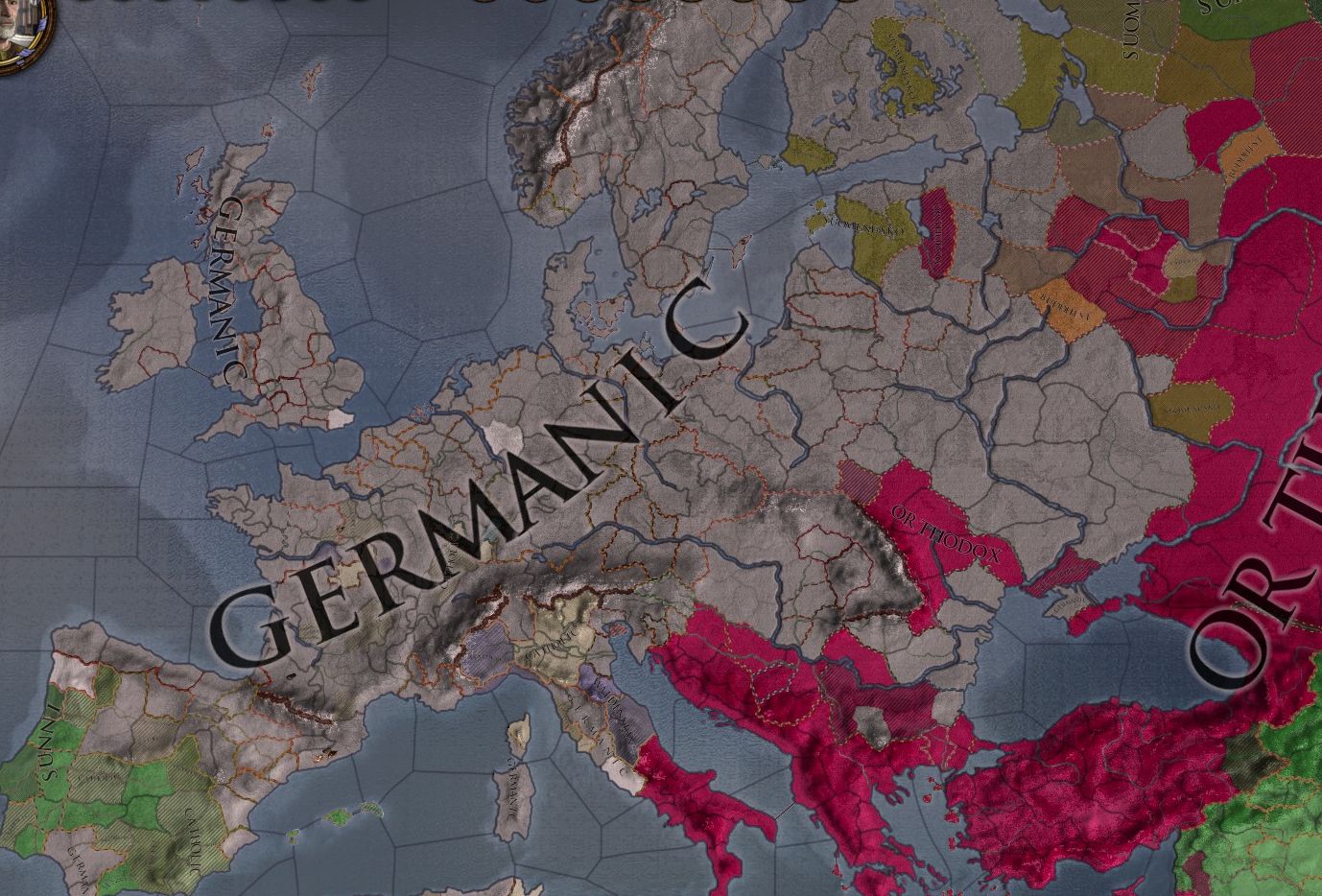 6
How to keep HRE at bay as a pagan (Old Gods)?
0
How can I reclaim a barony from a Holy Order?
6
Why can't I start a great holy war
3
Can pagan holy orders be used against other pagans?
5
How do I push the 'Holy Roman Empire' out of Britain?
3
Does a Heretic religion have a shorter holy war range?
1
Reforming the Roman Empire as Catholic
5
If, as a Cathar, I Holy War an excommunicated Catholic, will other catholics help him?
0
Can Reformed Slavic Pagans Request a Great Holy War?
9
Do Crusades or Holy Wars Affect Infamy?