My Steam client always waits for an hour+ to start downloading a game update: "Scheduled for 19:35". There is a button to force update though. Auto-updates are turned on for all games.

How can I make Steam download updates immediately without additional interactions? 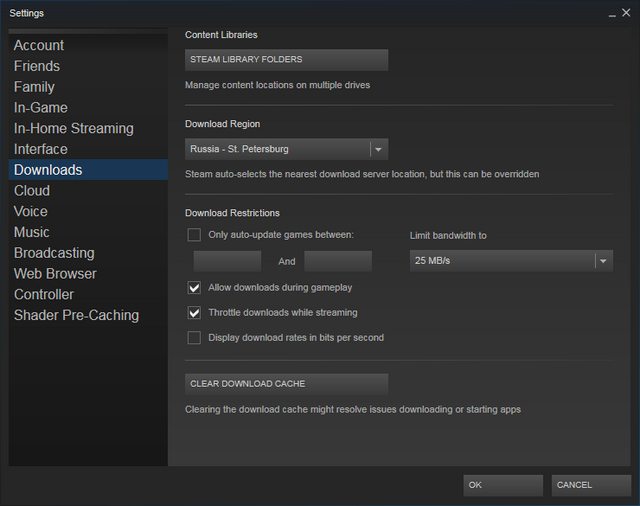 This isn't something that can be turned off (unless you manually do it per-game), and happens for two (main) reasons:

For what it's worth, the best workaround I found is to scroll to the bottom of the update list and click "download now" for the bottom update. You can keep your mouse cursor in the same place and keep clicking "download now" for each update. Once you have gotten through the list, they will all be queued for immediate download.

I have an old gaming PC that I rarely use so there are always a ton of updates. This is how I get them to all run immediately. Hope this helps. It's not a fix, but I believe it is an effective workaround.

The simple answer is you can't, it's a feature.

It's actually that steam only automatically downloads your most recent played games immediately. Other games are set for future update depending on how long ago you last played them. This started happening about 2+ years ago that I could recall. It's designed that way to relieve bandwidth on game updates.

EG: Path of Exile has a major season update each few months. I have it installed but no longer play it (like I guess a lot of people do with a bunch of games). It delivers the update to people who need it first. Mine is normally set to update days, even weeks later.

I do however wish they would add a "Download all now" button. I'm one of those people that clicks things to get rid of the notifications because they don't look neat/clean and I have hundreds of games installed at once, and clicking each update becomes annoying lol.

2
How does Steam decide when to update my games?

6
Completely unable to use the Steam client
7
Does the Steam client automatically download pre-ordered games after their release?
4
Steam starts downloading updates while in-game and ignores throttling limit
3
When do Steam Workshop mods download/sync?
6
Are games on Steam already up to date after the initial download?
4
Can I download Steam game updates on an account that doesn't own the game?
7
How do I stop Steam changing my update setting to automatic?
2
How does Steam decide when to update my games?
1
Steam download issues