Does the experience required to level up ever plateau?

In patch 7.22, League of Legends implemented a leveling system to replace their previous system that capped the level at 30. With this new system, there is no level cap and the player's account level will continue infinitely.

When attempting to estimate the speed at which a player levels up, according to the League of Legends Wikia,

Estimating the required time to level up can be done by taking one's level and noting its position beyond a multiple of 25 (except for the first two progressions: 1 to 30, and 31 to 50). Example: Leveling from 51 to 52 is faster than leveling 74 to 75, but also quicker than a player at level 49, since you're positioned at the very first level of the count (51 to 75).

Edit: It was brought up to me that the Leveling Up section in the Wikia linked earlier also contains a graph that includes the XP needed to reach the next level. Unfortunately, once the higher levels are reached in the graph, the XP needed just changes to question marks. So it may be the case that nobody knows for sure.

The required experience needed per level goes through a "staircase effect" depending on where your progress to the next milestone level is. 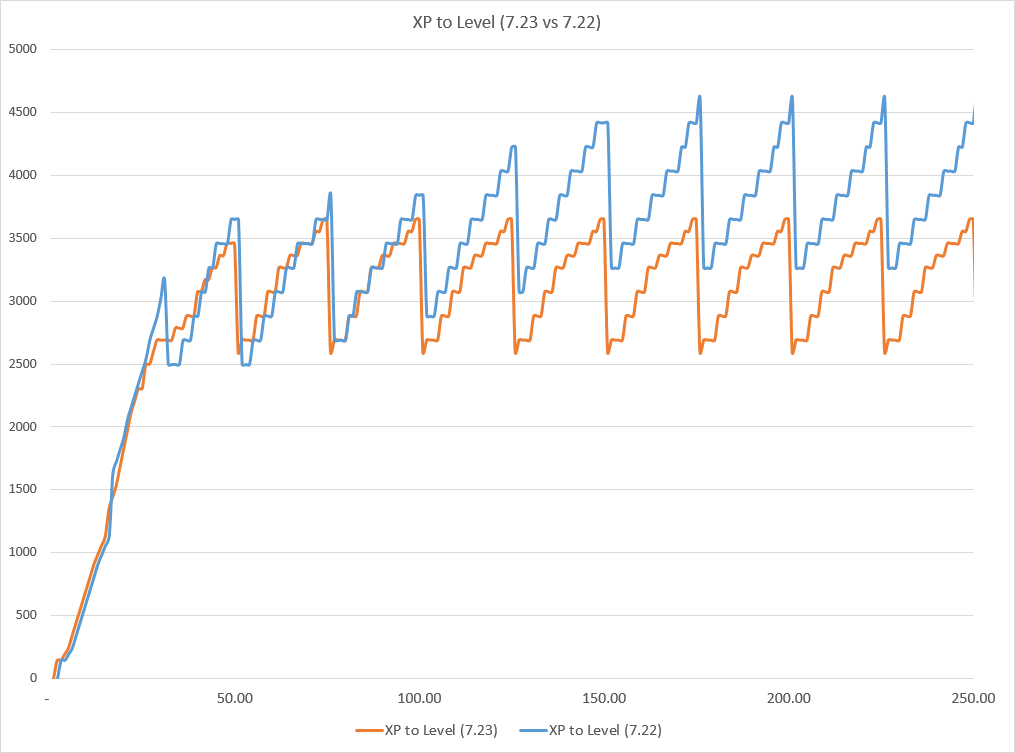 In the above graph, the blue line represent the leveling curve as initially released during the preseason, and the orange line is the updated (current) leveling curve. As you can see, in the old system the staircase gradually moved higher and higher until about level 150, where the "staircase of difficulty" for leveling up plateaued. In the new system, the staircase plateaus much earlier, at level 50.

Every 25 levels you accomplish, you will receive a glorius champion shard. After this, your Required EXP to Level-UP (Req.XP) will increase every level.

As soon as you hit level 75, the Req.XP will restart at a lower amount

And if there is a plateau? That is yet to find out, or needs to be developed yet by their dev team.

4
How are “premade” lobbies matched against opponents?
4
How can I be a more effective ganker and initiatior as Rammus?
2
What purpose does experience serve after reaching summoner level 30?
4
Why is it so hard to rank up?
1
Does middle lane experience range reach the wraith camp?
3
Running LoL on guest account on mac
2
How mandatory is leveling up in League of Legends?
4
Can a casual, 'bad' player compete with other casual, 'bad' players around the same skill?
2
How can I see very old rankings in League of Legends
1
How does difficulty affect XP rewards in Co-op Vs. AI matches?