Is there any strategy to 2048 Numberwang?

I tried out 2048 Numberwang and I can't figure out if there is a strategy to it. Unlike 2048, the numbers keep changing every time you press a key. I just kept randomly pressing the arrow keys until I got to the point where the game ended. Is there a strategy to actually playing?

If you ignore the randomly changing numbers, the occasional shinty-six, and "that's numberwang", it actually plays just like 2048. You can and should ignore the numbers on the pieces- use the colour of the backgrounds instead.

There are a few differences. Most notably, tiles have a 2.5% chance of merging even if their value is not the same. This makes the game significantly easier than real 2048.

All you need to do is to use the same space management strategy that you'd use in 2048. I pick a corner (usually upper-right), and take turns alternating a bunch of right keys followed by a bunch of up keys, letting the large values accumulate in the upper-right corner. If you get "stuck", then usually a down-up, left-right, or down-right-up button combination usually gets things flowing again; once you practice a bit, you'll get a feel for which to use.

I've already gotten a score of over 200,000 points, which was actually my first run, even. If you were to watch me play, it'd appear largely random, but it's not--I'm corralling the larger-colored squares to one corner to make room for the others. Every once in a while, you'll need to slow down and merge some colored blocks together, but that's more an exception than a rule.

This is what it should look like most of the time: 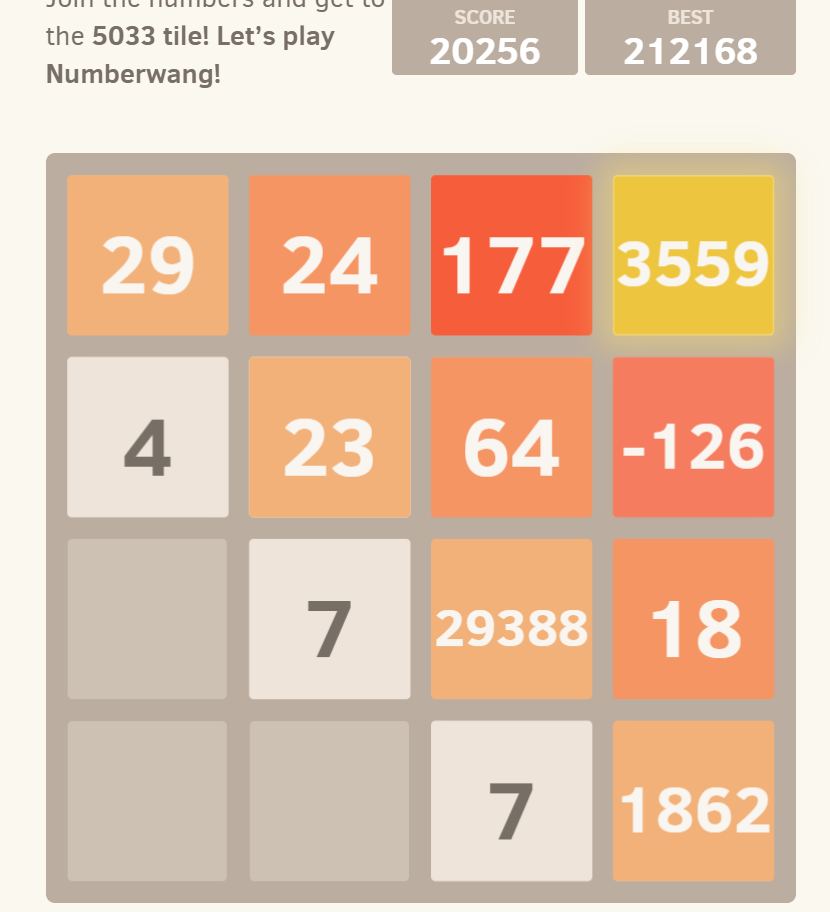 The numbers seem to be meaningless, Blocks match and merge based on the colors but they also have a probability of merging even if they don't match. It seems that darkening colors serve a similar purpose to the rising numbers in regular 2048.

This probability is per keypress. Even if you press a key in a direction where nothing would normally move there is still a probability of mismatched tiles merging.

New tiles only spawn if something moves.

Black tiles do not seem to want to merge under regular merge rules but it seems they will merge as part of the random merging.

So play like regular 2048 using colors instead of numnbers but when you get in a bind repeatedly hit an arrow key in a direction that will normally cause no movement until the random merging kicks in.

Do not let all the squares fill up, if you do then you are very likely to lose.

In this way you should be able to go on playing for ever.

Not the answer you're looking for? Browse other questions tagged 2048-numberwang .

25
When is it Numberwang?

25
When is it Numberwang?