I'm making a sniper with 1.12 commands. It's working very well (except for the fact that bows don't shoot perfectly) but I have a problem: arrow speed.

If you shoot an arrow at minimum speed, you can literally overtake the arrow and jump into it. That's not a very nice sniper -_- So I searched on internet and I only found one solution that blew up my world and is not survival friendly. So I'm asking you if you know anything to speed up an arrow (the arrows already have the tag of {Nogravity:1b}) you don't know in which direction the arrow is flying so I can't use the Direction:[0.0,0.0,0.0] tag. I also tried effect @e[type=arrow] 1 1 10 in a repeating command block.

I'm not a noob so you can trust me I didn't make [always active] mistakes or something.

btw this is how it looks 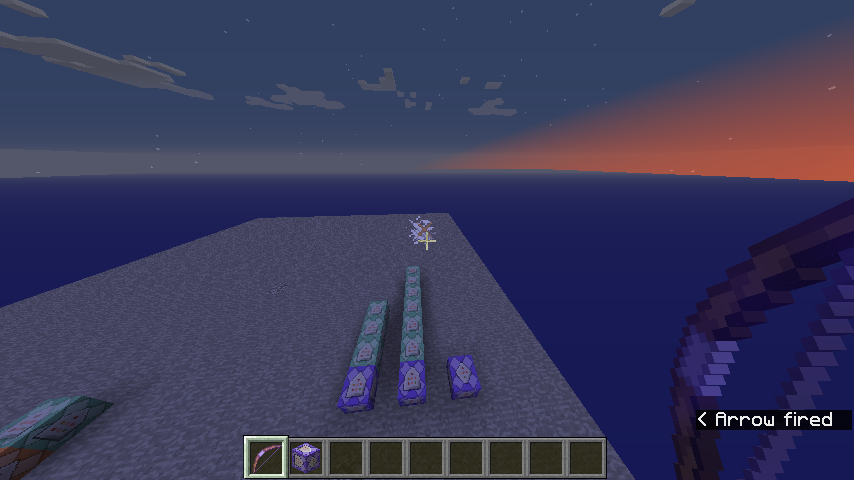 Arrows being shot is unreliable due to RNG, you get this with bows and dispensers as you may know. However - given enough tnt, they're randomness will counter each other (for a tnt that will propel the arrow left, there is a tnt that will counter that and propel it right). making tnt highly accurate for projectiles. The arrow can be summoned in front of tnt and it's speed can be adjusted depending on how much tnt you use and the distance the arrow is to the tnt (the more tnt, the more accurate).

4
Making skeletons shoot explosive arrows
0
Make Fireballs Fly Faster?
0
My arrows aren't being executed at by a looping function/command block
1
Is it possible to detect in which way the player is facing at exactly and store it?
0
Need to make target selector only select one entity
1
Need help with custom NBT tags (1.13)
3
Only arrows with names fly straight
2
How do I make arrows despawn faster?