How do you unlock smoke grenades in Battlefield 3? You earn the M320 grenade launcher early on in the progression for the Assault class, and the M320 says in its battlelog page that it can use different grenade types. But it's unclear how you earn these alternate grenade types?

A single shot 40mm Grenade Launcher, the M320 replaced the old M203 in service with the US Military. Initially developed for the G36 assault rifle, the M320 allows a larger variety of ammunition to be used with the weapon including Fragmentation, Flechette, and Smoke rounds. The M320 can be equipped on some Assault Rifles with the Underslung Rail.

In battlelog most weapons with unlocks show a progression, eg. the more kills you get with a certain weapon, the more equipment and ammo unlocks you earn. But there's nothing displayed in the unlocks next to the M320: 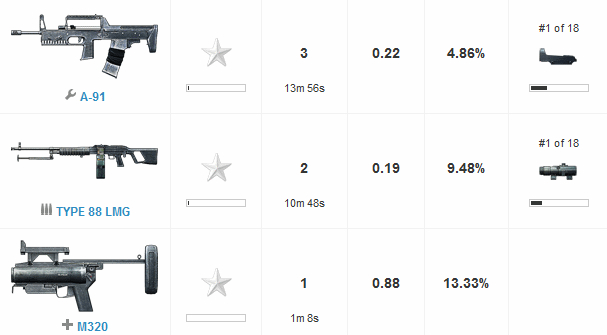 And if you click on it, no unlock progression. Compare with the progression with the DAO-12 shotgun which clearly shows different ammo types unlocking with a certain # of kills:

Conceptually this is a different ammo type for the grenade launcher weapon, but how do you unlock the smoke and flechette grenade types?

I cannot find a definitive source for this, but apparently:

Why this can't be displayed in the battlelog in some form along with all the other zillions of weapons unlocks, I have no idea. But this is what people reported from the beta.

edit: confirmed, by me personally getting the unlocks. I presume the same rule applies to the Support class mortar, get 10 kills with mortar to unlock smoke mortar rounds.

Unlock the smoke M320 grenade by killing with the normal M320. You already have the smoke mortar: just switch ammo types with the appropriate controller button (console) or 2 (pc).

Not the answer you're looking for? Browse other questions tagged battlefield-3 .