I've made a Zombie XP Farm which has been working pretty well by using the new water elevator which uses the soul sand to push them up. In order for the elevator to work though, I have to surround the water sources with solid blocks.

Previously, in my old model the zombies had to push each other into the water elevator through two fence gates which worked but it was a slow process as they often wanted to go against the current that was pushing them into the elevator. So, I figured why don't I use myself as bait to cause them to want to get into the elevator by placing myself on the opposite side of the water elevator using signs to prevent the water from spilling on my side which worked really well.

After that, I thought to myself, "Why don't I just place a Villager in my place to attract the zombies into the water elevator so that I won't have to keep going down there to attract them". After placing in the Villager, I noticed that the zombies had no interest in attacking him. They kept wanting to go against the current, they weren't even looking at the Villager, and the process was as slow as the old model without bait.

Does anyone know what the problem could be? I thought that Zombies in the Java Edition of Minecraft could see through ALMOST anything including glass, ladders, slabs, fence gates, and signs at a far distance. I tried all of these to see if they would be able to see the Villager but it doesn't seem to work. They only seem to be attracted to me when I put myself as bait. 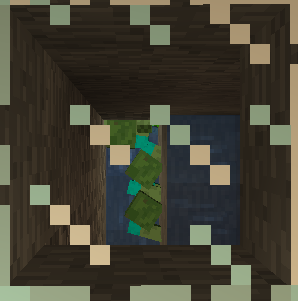 Please let me know if there's anything that I need to clarify or elaborate on. Thanks!

Sorry if I got this wrong, I cannot comment.

11
How do I kill zombies in Minecraft and not get hurt?
17
How can I bring zombies down to one-punch kills in Minecraft?
3
How to create a floating layer of signs that lets eggs through in a chicken coop?
3
Can zombies spawn in the nether?
5
Minecraft /execute detection being touchy
5
Do I need a nametag for my converted Zombie Villager?
0
Villager farm getting clogged
4
How are unemployed villagers claiming job site blocks claimed by other traded villagers?
8
Water stream push force too small