Is there an optimal room design for harnessing a cool steam vent?

I believe that most gameworlds on average have about one or two cool steam vents, meaning that you will likely rely on one to provide water for your base's ecosystem. 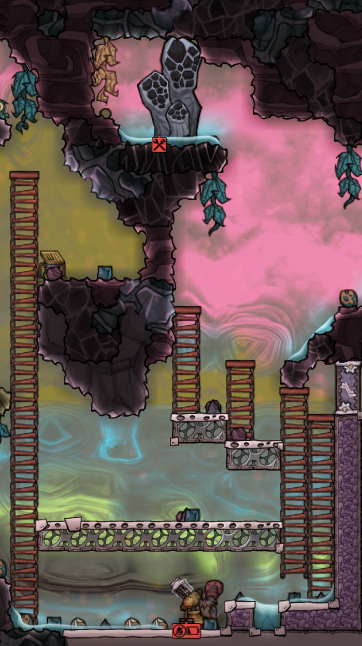 But I'm not sure how big the room should be when capturing the steam from a cool steam vent. I've tried both large and medium size rooms, it seems like you don't really want to try a really small room because the air pressure would get too high for the vent to blow as much steam and thus water as it normally would.

Also I'm not sure if I should bother insulating the room to contain its heat or do the opposite. To try to disperse the heat as quickly as possible into the environment. In addition, I wonder if there is a particular room design that allows the water to condensate and/or cool more quickly.

Often times in the game if you get a really solid room design down you can copy and adapt it ad nauseam. For instance I have a really nice self-contained Electrolysis room design.

Is there a optimal or useful room design for containing and capturing a cool steam vent?

You do not need to mind the air pressure too much. Build a room of any size that has sufficient room for a pump (gold amalgam in early stages). The room does not need to be isolated completely and the steam will quickly condense to water, which the room should have plenty of capacity for (1000kg per tile, instead of 1000g per tile for steam). The pump can then extract the water to any facility/tank you need it at.

So, as you can see, pressure should not be an issue. But temperature exchange is necessary for this process to happen. The room should not exceed the overheat temperature of the installed pump. Since it is 125°C with gold amalgam and the cool steam vent emits 110°C steam, you should be covered. In the early stages, this is simply established by not isolating the room too much. But with time it will bleed heat into the nearby areas, requiring cooling of them. However given the nature of the steam vent, this should not be impacting your base infrastructure, as long as you keep your distance from the steam vent when building temperature sensitive stuff such as farms.

It might also be a good idea to keep a medium-size pool of water inside the room to act as a temperature exchange liquid, so that the steam is immediately in contact with a heat exchanging medium.

Outside of the chamber, you might want to place a few wheezeworts (cooling flowers) (or ice machines (if their current balance is not adjusted)) to reduce the impact onto the rest of your base. Cooling the steam directly with wheezeworts is not a practical solution though, since steam contains alot of specific heat energy.

In the later game stages, you can employ more elaborate systems such as cooling pipes or steam generators to condense the steam. But you are far from that stage.

Finally, you might want to clear the atmosphere of the room before enclosing it. So the hydrogen should go somewhere else. Instead of pumping it out, it should be sufficient to simply dig out some more spaces above the vent and wait til the hydrogen sifts out of the spaces you want to enclose. Then you enclose the room and at a later stage you can clean up the remaining oxygen/polluted oxygen that is still in there.

P.S.: When it comes to your electrolizer module, the search term is "SPOM" (Self Powered Oxygen Module) https://forums.kleientertainment.com/forums/topic/87548-self-powering-oxygen-module-mkii-production-and-cooling/

It's depend of the moment of the game: At the beginning a small room is enough, but more the time pass more you will need extra : more room to manage the pressure, to pump the hydrogen, and so one.

My advice : start small, but don't build thing arround. you can add a manual pump for waking and water emergency(with repair disable. Once it start to break, you will never be able to fully repair it again, but don't destroy it: keep it unrepair),

When you discover isolated wall, isolate-it and make it slighty bigger.( the pump should by hs by now, but don't repair-

Then when you discover mesh, you can finally remove the pump and replace it with mesh.

When you discover Electrolyzer and hydrogen generator, choose the more productive steam vent and build a bigger room around.

Not the answer you're looking for? Browse other questions tagged oxygen-not-included or ask your own question.