Dracul's Grasp has a 5% chance to cast life tap on striking. Does throwing a Javelin count as striking? 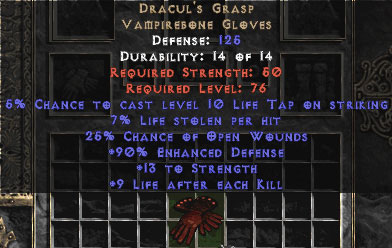 Yes throwing a javelin counts as "striking". These gloves are just poorly worded. Basically it means using any "attack" and not a "spell".

For your question with javazons, I included two examples to help with judging what is an attack and what is not.

Lightning strike and charged strike will proc because it hits with the javelin (the splits from lightning strike do not count because they count as a spell and not an attack), while a skill like poison javelin will NOT work, because it just leaves a trail of poison and doesn't hit.

Striking is when you hit (ie. you don't miss)

Not the answer you're looking for? Browse other questions tagged diablo-2 or ask your own question.