What is it about TF2 and hats?

I see in a lot of posts talk about Team Fortress 2 and hats, what is that about?

What is so special about hats in that game?

The TF2 Forum community has had a thing for hats ever since the Spy / Sniper update when they (and the random drop system) were implemented.

They like to complain about hats, cheer about how awesome their hat is, or worry that too many people are complaining or cheering about hats.

Of course, it may have all petered out, but Valve decided to add more hats. The classless update only added fuel to the fire with such quotes (from the Blog Update news itself) as: http://www.teamfortress.com/classless/day01.php or,

Throughout history, men have worn hats as a way of showing how much better they are than other men. “I buy hats,” a behatted man seems to say. “I am better than you.”

It appeared to reach its height when the Valve blog (not an update post, mind) itself seemed to indicate that hats were the most important things to the developers.

Suffice it to say that Team Fortress 2 is no longer a first person shooter with RPG elements. It is 100% a hat simulator.

This comic more or less explains it: 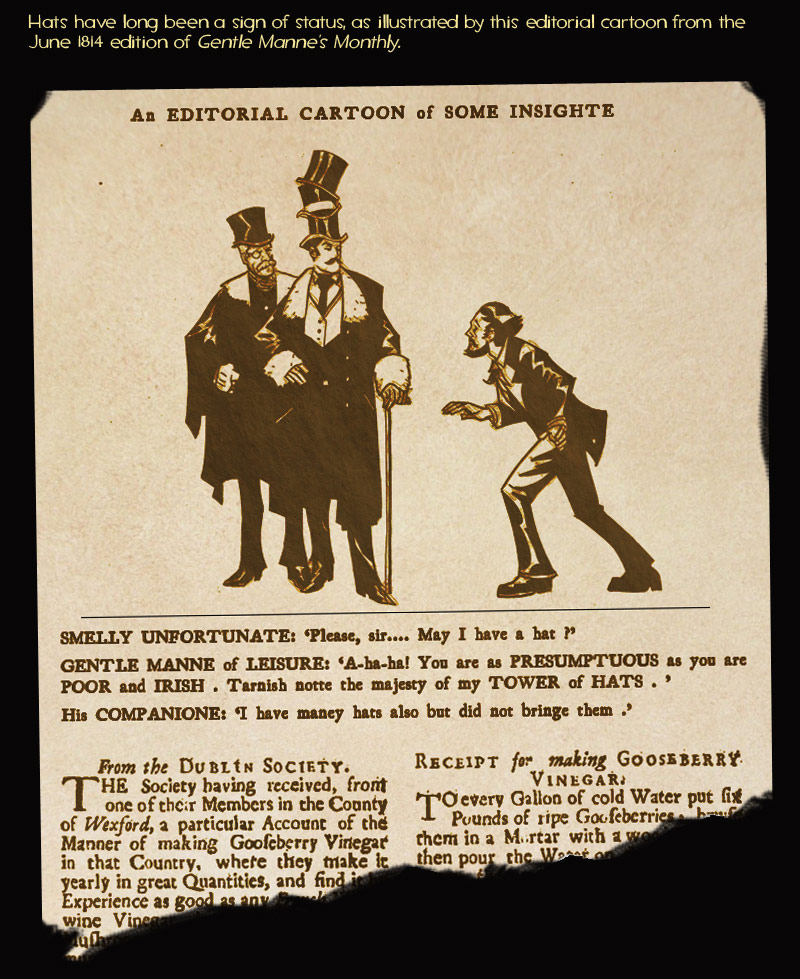 Hats are the main unlockable customizations available for your character during loadout. Hats do not affect your character's stats in any way and are purely cosmetic. Some hats are rarer than others and are highly sought after.

Valve awards some bonus hats to people who pre-order their games. For instance, "Bill's hat" was awarded to anyone who pre-ordered Left 4 Dead 2.

One final thing to note about the Hats of TF2 and the reason they are so popular.

You see, Valve originally created these hats as rare drops as non-monetized findables. With the help of Paypal, people discovered that they could make a lot of money 'legitimately' selling their hats to others. This in turn prompted Valve to fight this 'legitmacy' by implementing the Mann Co. Store and Steam Credits, so that those wishing to pay real-world money for fake-world hats could pay Valve directly.

Finally, Valve started to let people design hats for the game itself, and contribute them to the Steam Work Shop, so that they could also make some non-quoted legitimate money off of this hat business.

So, not only are they the only vanity item in the game, propegated as being important to your class, AND the main focus of the entire game...

But some people also make real money off of those hats.

10
What happens if I remove paint from a hat?
22
What are the vintage items?
4
Do TF2 dedicated servers require special config to allow players to get item drops?
12
What hats in TF2 are, or were, available for free?
6
How can I fix TF2 segfaulting running on Linux?
1
What was the urine joke all about?
3
Can I legitimately get any hats for free?
10
I can't see myself chat in Team Fortress 2
7
Why do hats sometimes randomly appear?