Bonus on skill damage or raw damage, which is better in this case?

I'm playing a Wizard and my main skill is Disintegrate.

My wand gives me 21% bonus damage on Disintegrate. I found another want that doesn't give me that but has more damage and intelligence. 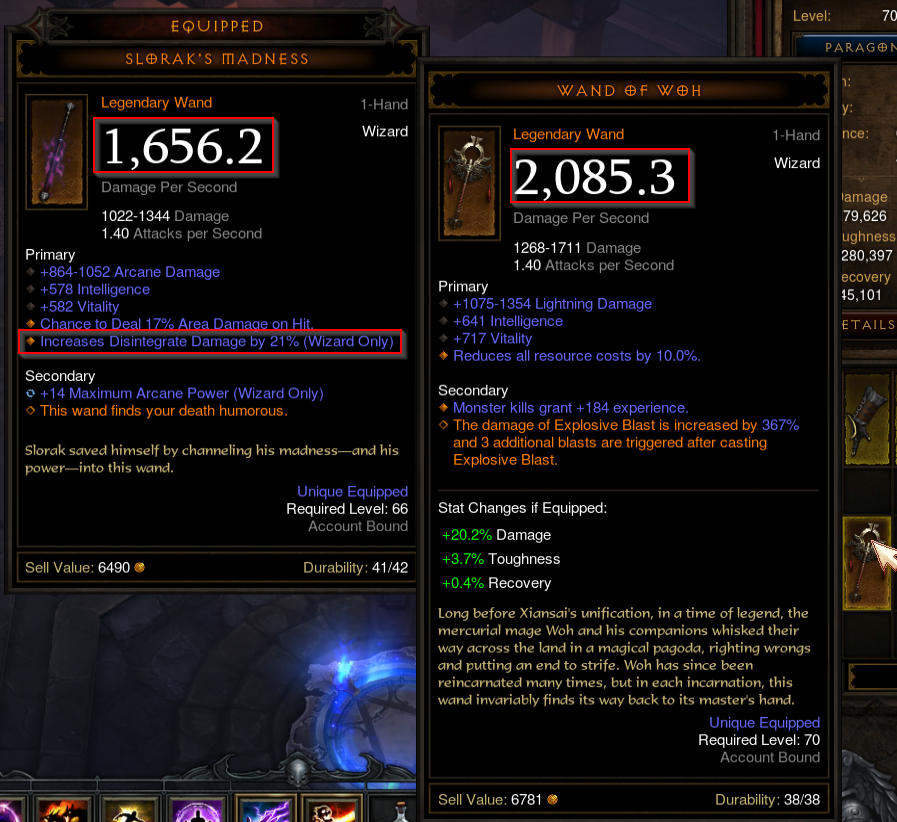 Which one is going to do more damage when using Disintegrate? Why? How can I calculate that?

If you have no other source of increased disintegrate damage then the first wand should be better, seeing as the other wand increases general damage by 20.2%.

However, you could still reroll the vitality, or reduced resource cost, on the second wand for a damage based prefix (especially a socket) and it would then surpass the first.

I'm pulling this explanation mainly from this wiki, but it's consistent with every explanation I've seen for how damage in Diablo 3 works.

When calculating damage, the game first multiplies together your "basic" stats, like your weapon damage (after modification from the skill being used, if applicable), primary stat and critical hit damage (if applicable). Once it has that number, it will further increase it by special stats applied to that particular attack, such as increased damage for the ability. What this means is that you can generally use the strategy VanBuzzKill suggested - compare the percent damage increase given by the game, and flatly add in applicable skill or elemental bonuses. With that said, there are more damage related things to consider between the two items -

0
Equipped weapons of Wizards and their Durability
4
What is better: Increased Attack Speed or Primary Stat % Bonus?
7
How does Blood Star work?
13
Why does Disintegrate deal more damage than Ray of Frost?
3
How do you calculate bonus damage to skills in Diablo 3?
1
How should one weigh Critical Hit Damage when selecting equipment?
0
Which item have the affix +X% damage against <mob type> / Elites?
4
Elemental Damage vs Skill Damage