What's the level cap in Skyrim?

In Oblivion, the way the game worked, the max level possible was based solely on your choices for primary skills, and could vary anywhere from between 45 and 53 (with soft-caps at 29 and 35 in terms of NPC leveling) or when you maxed all of your character attributes at 100.

What's the level cap in Skyrim? Is it a hard or soft cap -- once you hit it, can you continue to 'level' your skills and unlock perks anyway?

Since patch 1.9 there is no maximum level anymore.

If you have a skill at 100 you can make it "Legendary". This resets the skill to 15, gives all perk points invested in that specific tree back. Be warned: You lose all the benefits of having a higher skill level! The advantages of making skills legendary are:

It is possible to repeatedly make a skill legendary or to make multiple skills legendary, this allows you to (slowly) unlock all perk points.

There is a linearly constant amount of "experience" required for each level. The formula is simply:

Where level is your current level.

"Experience" in this case is earned strictly through skill ups. Leveling a skill to X will give you X experience towards your next level. For instance, to level from level 1 to level 2, you require 100 experience. This means you can either raise 5 skills to level 20, one skill to level 21 (assuming it starts at 15), or any other permutation thereof.

Also, and this is important:

There is no soft cap

Level 81 is just as (relatively) easy to reach as Level 11, it just requires more total experience.

Since all races have +10 to one skill and +5 to five skills, this means there is a total of 88,085 "experience" to earn, and this is constant across the ten races. Level 82 would require 89,100 total experience, and is currently unreachable.

Thus, when your character maxes all of their skills, they will be level 81.

According to Todd Howard, game director at Bethesda, there is a mathematical cap somewhere in the 70s. Although most players will max out at level 50.

See this article for details.

Since you gain perk points each time you level up, and levels only by increasing your skills, the maximum level is when all of your skills are lvl 100.

For my cat I tested this with (using console commands) I managed to reach lvl 81 (and a bit), for a total of 80 perks.

(This is an update to the current answers, regarding Patch 1.9's changes.)
At higher levels, leveling up happens much more slowly. Level increases in Skyrim follow a formula (detailed here). Prior to Patch 1.9, the maximum level was 81, since there was no way to gain any more experience once every skill reached its maximum value of 100.

With Patch 1.9, individual skills can be made "Legendary", denoting them with an Imperial symbol. This will reset the skill to 15, and perks used for that skill may be redistributed. Gaining levels in that skill will affect leveling again, thus effectively removing the level cap of 81. There is no restriction on the number of times that skills can be made Legendary. This change makes it theoretically possible to obtain every single perk in the game.

According to the formulae, training one individual skill all the way from 15 to 100 (one mastering cycle) yields 4,930 XP. This amount of XP is enough to level from 1 to 17, or from 194 to 195. Leveling up to 252 (unlocking all perks) would take a total of 809,475 XP. This corresponds to over 164 skill mastering cycles, or mastering every skill over 9 times. The proper approach to such a huge task would be to find the easiest skill to raise and to exclusively focus on that for leveling purposes.

As others have said, you can reach level 81 without making any of your skills legendary, and at level 252, you should be able to unlock all available perks.

I was curious, after others stated that there isn't a level cap. In computer logic, number values have limits; having no level cap would be next to impossible. I set up Skyrim on my computer, and started playing around with my character's level, using the console.

I was able to observe the following behaviours:

This makes sense, as 65, 535 is the maximum value you can store in a 16-bit unsigned integer (the type of 'container' one might use to store and represent a player characters level in video game logic). When you tell a computer to 'add one' to a 'maximum value', it resets back to 0. This behaviour can be observed a lot more easily in early computer games, as they would often use smaller containers to save memory. 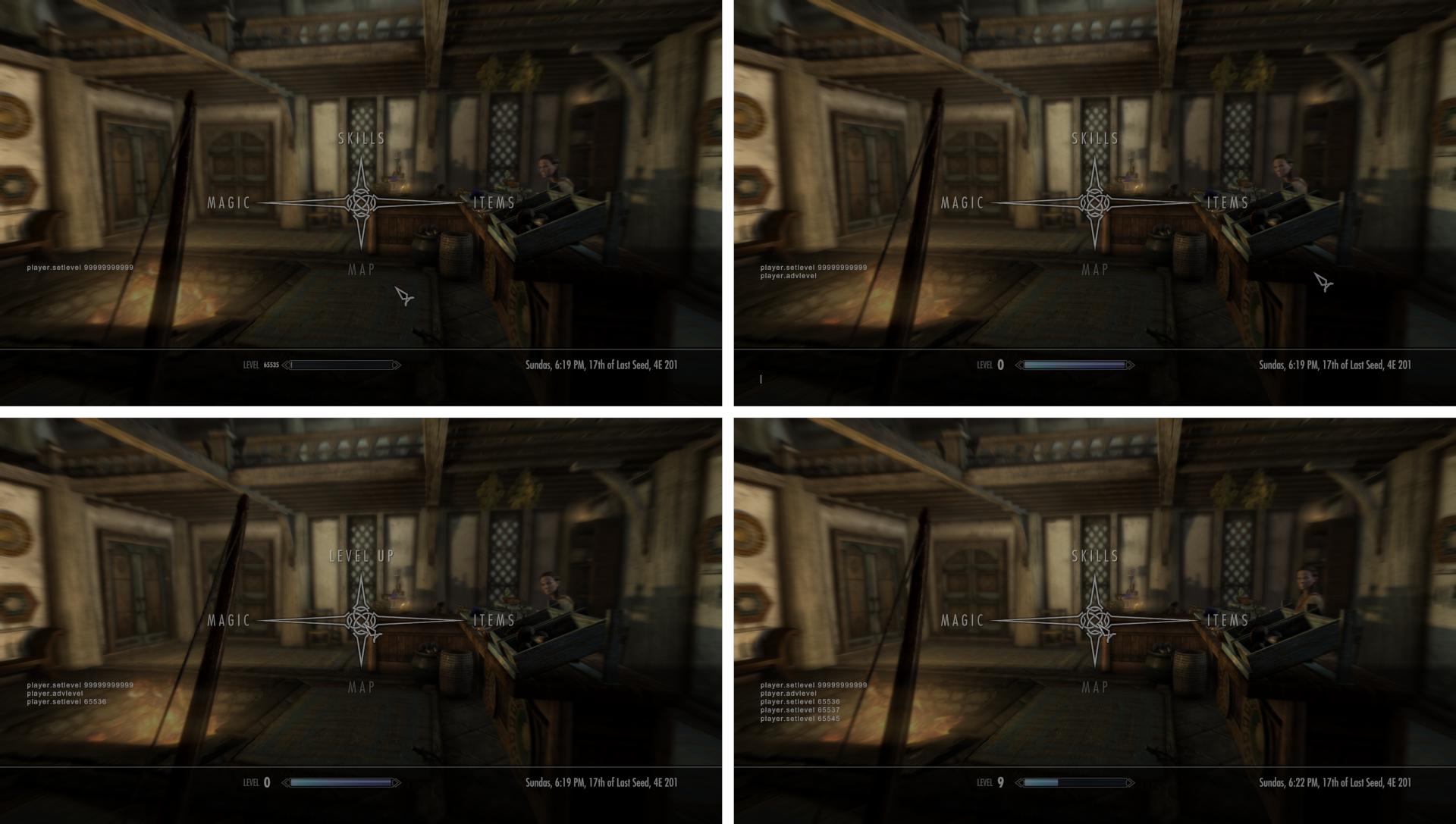 Out of curiosity, I thought I would see what happens if I manually level up from level 65, 535. I used the console to give myself the ingredients required to make 10, 000 invisibility potions. I found the nearest alchemy table, and spent the next 30 minutes spamming R. I made the following observations:

Extrapolating this information outwards, I predict needing to hit up to legendary rank 400 before seeing the progress required for the next level. By mass-producing invisibility potions, I predict that this would take upwards of 28 solid hours. 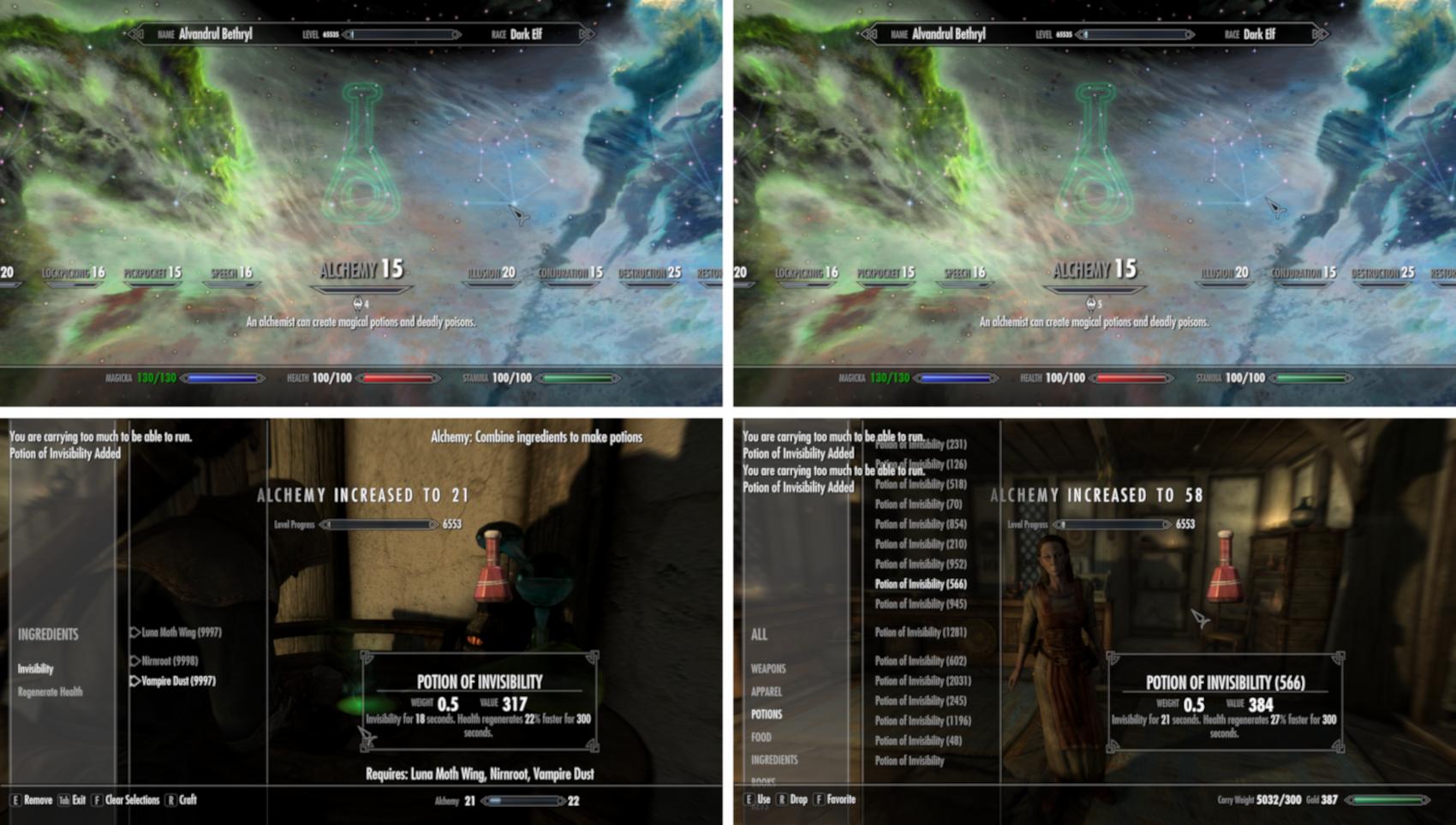 I'd like to expand on what GalacticNinja stated, an example of an easy way to level up, though this isn't the only way. At the start of The Elder Scrolls: Skyrim, if the player chooses to follow the Imperial Guard (I think) and you are searching for some armour and a sword, it is set so once you open the chest, it continues to the next room. However, were you to instead pick up the sword on the wall and sneak behind the person you followed, you can hit them with the sword without being detected or instigating aggression. It takes roughly 50 minutes to max out the sneak skill, as for the one-handed skill, it should be around 32 the first time.

Once both sneak and one-handed are made legendary at least once and then taken back up to level 100, you have the benefit of being practically undetectable in the darkness while having a killer one-handed skill (If you'll excuse the pun). Once you get a dagger, you will be able to one-hit kill just about anything if they didn't scale up in level to you.

-3
Skyrim highest level(combat/character lv)
1
Is it possible to get all your stats to 100 in Skyrim?
14
Does staying level 1 reduce the requirements for gaining xp/levels?
6
What's the max level we can get in Skyrim and max perks?

15
What's the deal with rings in Skyrim?
4
What's the extent of customization in Skyrim for the PC?
5
Can you raise your character's main ("Hard Cap" - Level 81) level higher in Dawnguard?
2
Breton resist magic cap in skyrim?
4
What are the benefits of legendary skills?