How to achieve a 2 way ensured lucky trade where 1 of the traders has already 9 luckys obtained through trading?

I plan to make a trade with someone. That person has a shiny magicarp, I would like to have as a lucky form, the other person wants one of my shiny moltress as lucky form.

The problem is, my trade partner has already obtained 9 lucky pokemon. But I know, one of my first lucky trades I made with someone, that person had aswell already more than 10 luckys, but since I didn't had them, it worked for us both getting a lucky from the trade anyways. I want to use that here for my advantage. So we plan to trade one of my pre 09/2016 pokemon for the other persons magicarp and one of the other persons pre 09/2016 pokemon for my Moltress. The problem is, I can't remember, if it was my pokemon having been from pre august when I made this trade back then and it worked, or it was one of the other person.

So my question is:

Who has to trade in first his pre September 2016 caught pokemon for our plan to work out? Or isn't it important at all, as long one of us hasn't obtained overall 10 lucky pokemon yet?

I am not asking for how to improve the chances of getting a lucky pokemon or something that alike.

I am asking, if it is relevant, who trades his pre September/2016 pokemon in first, to obtain the 100% lucky benefit in the specific scenario I described. 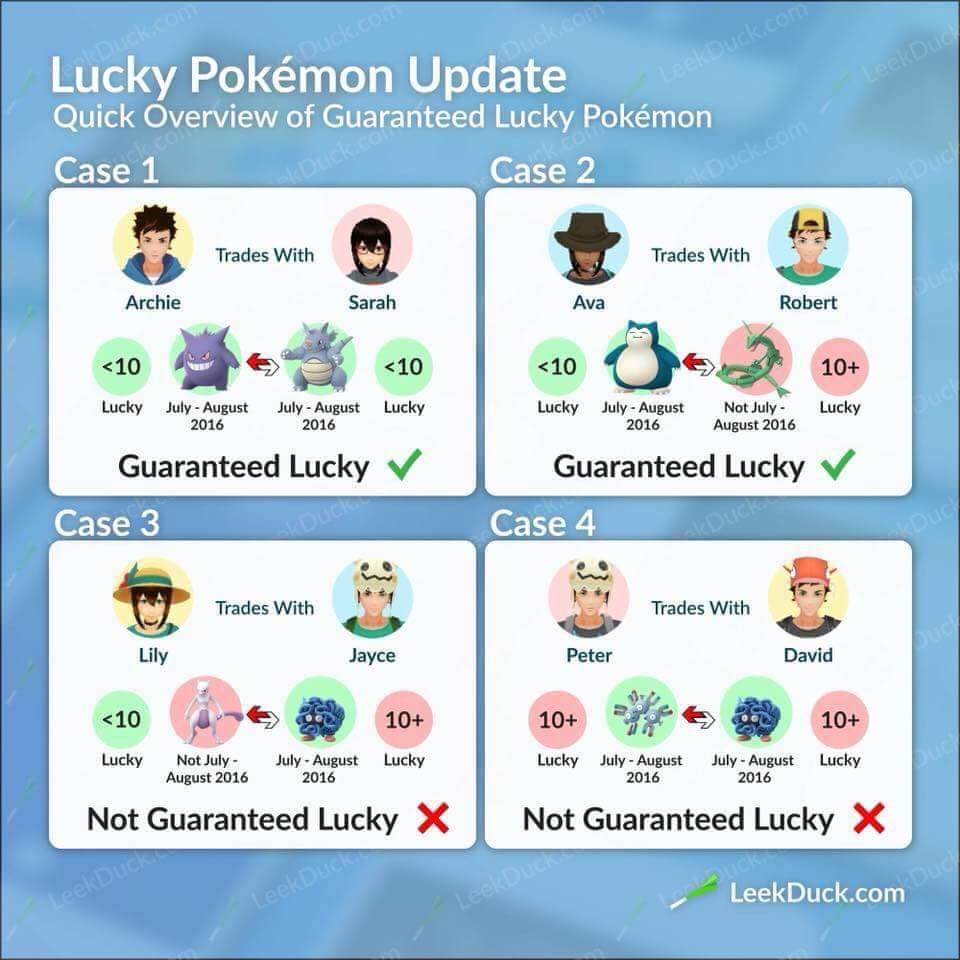 The person who trades the pre 09/2016 Pokemon must have less than 10 lucky Pokemon to guarantee a 100% lucky rate.

Regarding your proposed trades with your friend:

Trading for a "lucky" Pokémon from my experience, works best with age. The older the Pokémon (in terms of how long ago you caught them), the higher the chance that the Pokémon will be lucky when you trade it.

Although Pokémon turn into Lucky Pokémon at random when traded, the longer you have a Pokémon, the greater the chances that they will become Lucky Pokémon.

That works both ways - regardless of whether or not a Pokémon is/isn't already lucky, it (should) be when you trade it. So in the case of both Pokémon being 2 years old, you have a very high chance of both being lucky in the same trade.

0
Pokemon Go - One apple ID, two Iphones
3
Does a Pokemon run away if it despawned for everyone else?
1
Pokemon Go broken after last update
16
If a Pokemon is caught by multiple people, is it the same Pokemon with the same IVs/stats?
4
Does clicking a Pokémon on the map determine if it's shiny or not?
9
How much stardust is required for each type of trade?
2
How does the lucky attribute affect IVs during trading?
8
Do legendary skins count as unowned in trades?
8
Selected Pokémon has not been obtained in this save file & cannot be withdrawn?