Why are the analog sticks on my Nintendo Switch controllers all starting to drift?

About 2 weeks ago I noticed that the left analog stick on my Nintendo Switch Joy-Cons started "drifting", that is, without touching the stick (when it was centered) it would register as off-center causing characters in games to start randomly walking in various directions, frequently downward. This obviously makes playing games rather difficult, especially when precision is required.

I confirmed the problem in System Settings under "Calibration" where I would see the stick drifting off center (And the blue + would change) when I wasn't touching the stick. Recalibration did not help (almost made the problem worse)

The controller software / firmware was up to date and after researching and finding this is a common issue, and my console and joy cons are 13 months old (1 month past warranty) I bit the bullet and bought new controllers.

Yesterday the Pro Controller which I bought separately from the console started exhibiting the same behavior. It seems like too much of a coincidence to me that two separate controllers purchased at two separate times would start having the same problem at the same time. This makes me feel like it's a software problem, not a hardware one.

Here's what the calibration tool shows when not touching the sticks: 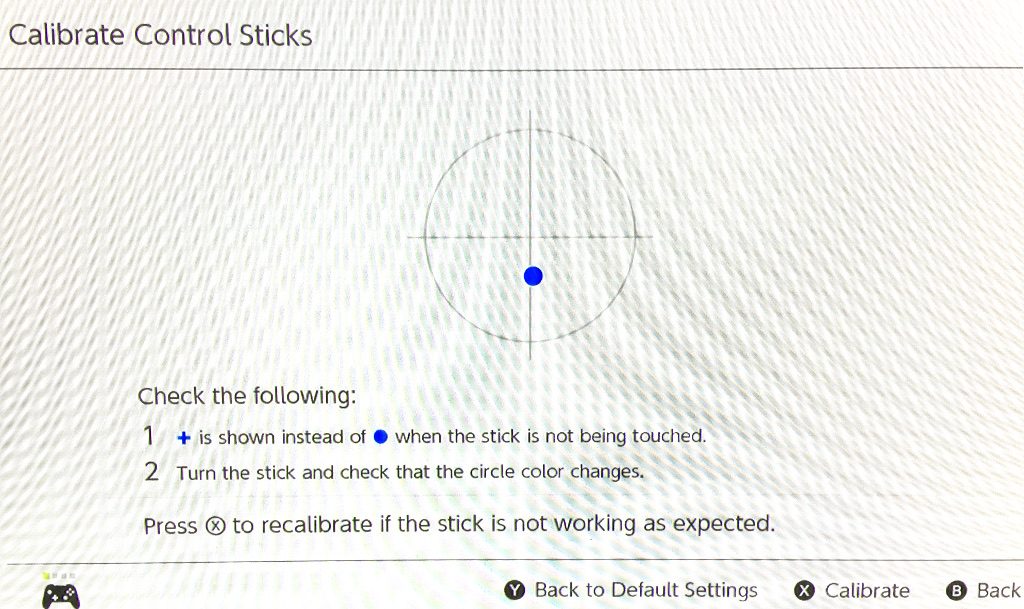 Why are the analog sticks on my Nintendo Switch controllers all starting to drift? Is this a known issue and is there any fix? Why would it happen to two separate controllers at the same time (and always to the left stick?)

This issue is now known as "Joy-Con drift." Nintendo eventually addressed this in July 2019 by allowing for free repairs without regard to warranty status* in North America.

Always start with the recalibration and firmware update since that's the fastest option. They also suggest updating the system software and removing any skins on the controller. If it still doesn't work and you don't want to try repairing it yourself, head over to the Nintendo Joy-Con repair page to file a request.

*: The page currently states "Each Joy-Con will be evaluated by our technicians for final warranty coverage." so you may want to give them a call to confirm free repairs are still available outside of warranty if your controllers are over 12 months old.

It sounds like the thumbsticks are wearing out, which is a problem common to all thumbsticks and not limited to Switch controllers. It's probably just a coincidence that you have two affected controllers.

I would try recalibrating again. If calibration made it worse that makes me think something went wrong in the calibration process. The stick is so off-center it seems like it must be a bad calibration rather than just a loose stick.

Storing the controller properly will help avoid damage to the thumbsticks. I throw my Switch Pro controllers in a backpack every day and have never seen any issues like you describe, but it can't be good for them either. Make sure the stick isn't pressing up against anything when it's in a bag or case.

Replacing the thumbsticks isn't TOO difficult but does take some time and a good screwdriver. The joy-con thumbstick modules are less than $10 on Amazon.

Not the answer you're looking for? Browse other questions tagged technical-issues controllers nintendo-switch .

8
Why were the N64 analog sticks so inferior to those that came after?
1
Does the Steam Controller have a button to switch D-Pad and Analog Stick?
3
Are you able to use the Nintendo Switch pro controller when the console is undocked?
8
Nintendo Switch left Joy-Con disconnects frequently. Fix?
8
Why isn't my Wii U GameCube controller adapter and Gamecube controller working with my Switch?
1
Does Ultra Street Fighter 2 (Switch) support local multiplayer on the same screen?
9
Can 4 Joy cons connect to the same Switch?