What can the 'Map' be used for?

So after resetting my run and updating to 1.4.5.1.c (current is .f), I found a new feature in my village tab. It consisted of a map, with fields, available to be explored.
I checked the wiki, and there doesn't seem to be anything on it yet.

Exploring a field would add a small percentage to the three values shown in the screenshot below ('Explored', 'Exploration bonus', and most notably 'Price reduction'), in exchange for a small, but long-lasting decrease in catpower production. Exploring a field would also make re-exploring it more expensive, and would sometimes enlarge the map.

Here is a screenshot of the map (from my save): 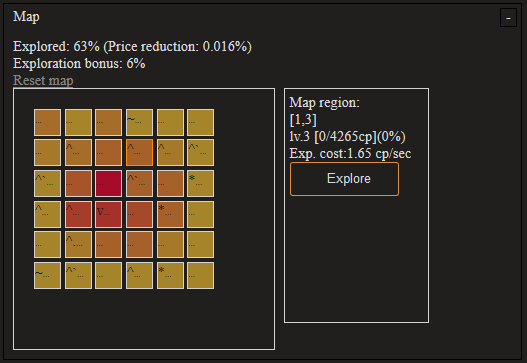 The price of exploring increases exponentially the more the field is explored, and the further away it is. So after time, the total number of explored fields will slowly level out.

Given a reasonably high number of explorations, let's say, 500, one would still only have a ~0.12% price reduction – if there aren't diminishing returns. Which is quite low, given the millions of cp and many hours it would take to get there.

So the question is, does the map feature give any other benefit then a slight price reduction (which would only help buy a few buildings late-game)? And as a side question, what triggers the map to appear?

Most of the effects of the map feature have actually been explained in the question already.

The exploration level of the village cell is internally known as the "village level" and it's what defines the exploration bonus (which affects how much an exploration will cost). It also affects the furs and ivory production of mints.

This is all moot though as, and that answers your side question, the feature is currently fully disabled and there is no way to unlock it. While it remains in the source of the game, the unlock conditions are ignored.

The unlock conditions were that you've researched Archery and that you have at least 1 paragon.

I couldn't find a source for the intended use of this feature or why it is currently disabled.

5
What does the magnetoBoostRatio do?
29
What can I do with a unicorn?
10
What do kittens use gold for?
7
How can I calculate my catnip output for a cold winter?
4
What is the use of culture?
15
What is the optimal strategy for sacrificing faith?
4
What is the "Mint-Effect"?
2
What do starEventChance and starAutoSuccessChance mean for the Observatory?
3
What can I do with Thorium?
9
During a festival, what does "double growth rate for a year" imply?