How did Austria expand to 4 tiles away without a citadel?

No mods. Austria somehow has two tiles that are 4 away from a city, which seems to be against the rules. This is a team single player game (2 humans vs 3 prince vs 3 prince). Is it a bug? It seems to contradict this post. 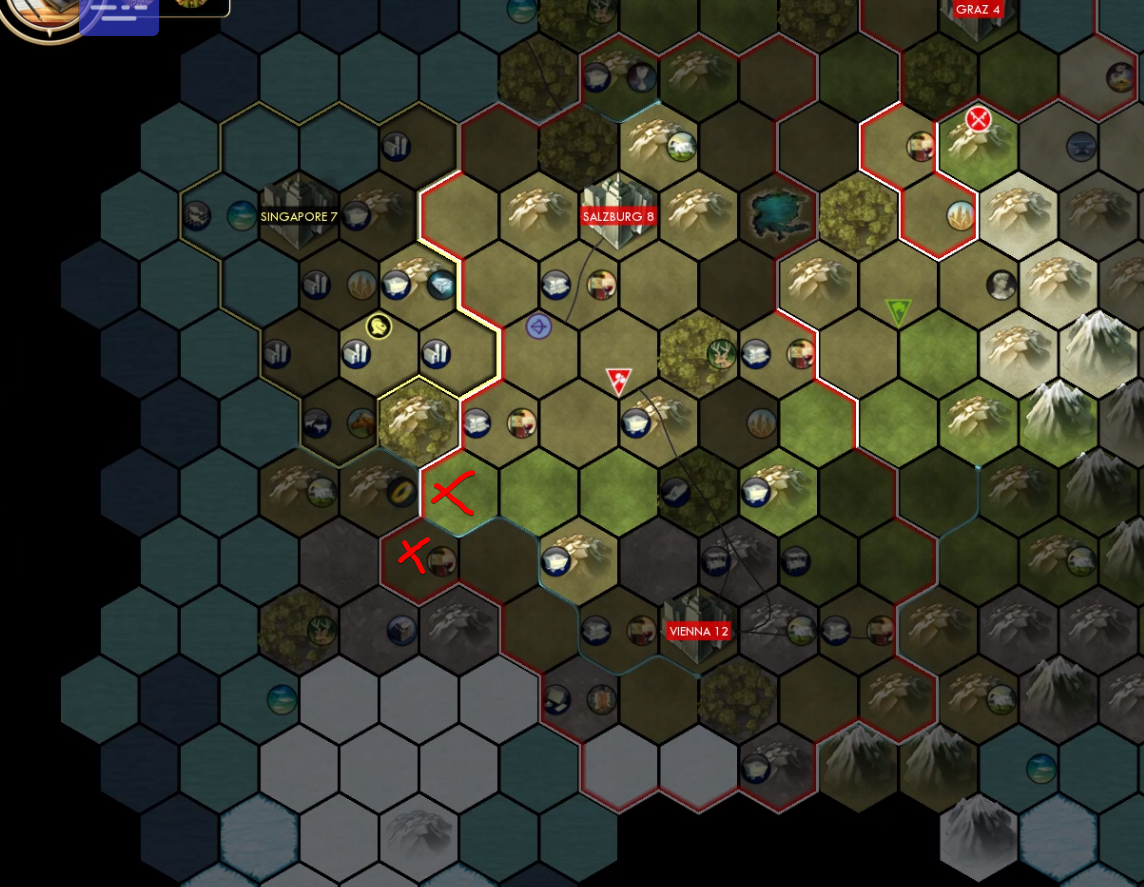 It isn't against the rules, although it is a little unusual.

Cities can naturally (through Culture gains) acquire tiles up to five hexes away from them. They can only work the inner three rings of tiles, but tiles in the outer rings are part of the country for the purposes of military units that care, can be worked by other cities (effectively increasing the rate those other cities gain tiles), and luxury and strategic resources there can be improved and added to the country's stockpile. And, of course, they can't be claimed by other civilizations.

Normally, the fourth and fifth rings of tiles are only picked once the first three are filled because they're less valuable. However, tiles with resources on them are an exception; they can be very valuable for the resources even though the yield can't be harvested. In this case, the expansion script appears to have picked the southern of those two tiles to acquire the wine there. This is perfectly ordinary behavior; I've had it happen with my own cities, albeit not all that often.

The northern tile I'm not sure about. One possibility is that Salzburg was the city that decided to target the wine tile, and it picked up the other along the way. Vienna being the original capital and hence older, though, I would expect it to have expanded in that direction first. Another possibility is that the expansion script gives some weight to "cleaning up" gaps or concave portions in the country's border. Given that Vienna has only a few less-valuable tiles left unclaimed in its third ring, that weight might have led it to pick up the otherwise valueless fourth-ring tile.

6
What are the rules for territory ownership when you raze a city?
4
Is there any way to use “orphaned” city-state-specific luxury resources?
3
Can I disable science sharing in my team?
2
What are the mechanics behind tile acquisition?
10
What factors affect a unit's contribution to city defense?
15
Full effects of being in the same team in Civilization V
2
Civilization V Patronage social policy tree when playing as Alexander
1
How to steal a square on a distant continent to work the Great Barrier Reef?