How does one randomly pattern mossy and cracked stone brick among regular smooth stone brick using worldedit? Is there a script for it or does the "vanilla" worldedit have the capabilities of doing that?

I'm trying to create some stronghold-esque ruins and regular smooth stone doesn't have the right atmosphere, but I don't have the time to insert cracked and mossy one by one.

You can do this using block probability patterns.

Most places you'd normally enter a single block type in WorldEdit, you can instead enter one of these which will give you a random distribution of blocks instead of just one kind. You can specify which blocks and how often they should show up.

As an example, if you were to select a zone and enter the following command you'd end up with something like the following screenshot: 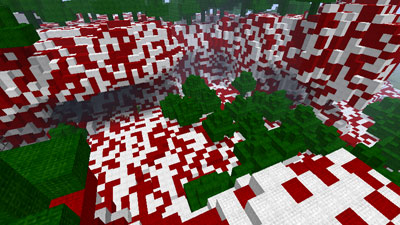 Note that you cannot specify a probability pattern for the blocks you are going to replace - only for what you will replace them with.

So to get dungeony walls...

Just tweak the probabilities until you get an effect you like. You might want to make certain areas more mossy, or certain areas less mossy and more cracked, so play with it a bit.

11
What's the difference between these stone brick blocks?
6
What's the data value ID for mossy stone brick and cracked stone brick?
4
How to construct a //g command with WorldEdit in minecraft?
1
Minecraft forestry multiple arboretum multifarms cannot work at the same time
4
Is there a command to spawn blocks in the air with worldedit?