What exactly does Wii Fit Trainer's Deep Breathing down special do?

So I know that it seems to in general buff most normal attacks, but what I'm curious is exactly what is the buff boosting, and by how much is it boosting it by? Am I missing any other attacks that it might be buffing? Tips tooltip states that it seems to buff movement speed as well but I have honestly not found a difference considering WFT is already a very fast character.

Toomai has already given you the raw numbers, so I want to talk a little about application and how those numbers translate to actual gameplay...

TL;DR: What does Deep Breathing actually do?

No seriously. This move alone is what takes Wii Fit from being an all around decent character to an absolute menace. I'll walk through some examples below, but this move...

With Deep Breathing active, your damage output is through the roof. That extra 1.2x percent is nothing to scoff at!

Here's a visualization of how it affects the damage on different moves in Wii Fit's arsenal (thanks to Ashlynn Zlicious (@violightning) for putting these together!): 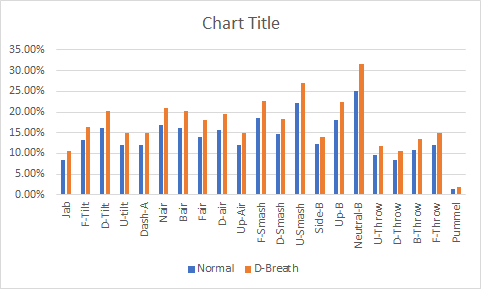 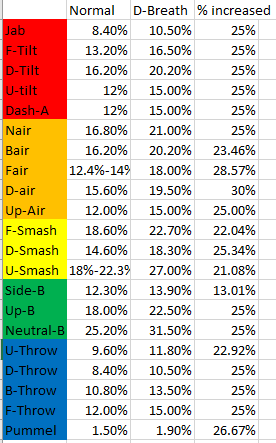 For example, this bread and butter Nair combo at 20% without Deep Breathing would normally put you into the mid-percent range for more combos. But that same combo at 30% with Deep Breathing brings you all the way up to 82%! Since you already have Deep Breathing active, that's kill percent!

Not to mention, if you started the match with Deep Breathing, down throw into full-hop Bair at 0% will deal just over 30%, setting up for this Nair combo.

So just two Deep Breathing combos will put a character at kill percent from 0! That's insane! These aren't even crazy difficult combos either. They'll work for any character and they'll work with a pretty big percent range. Trust me when I tell you: Deep Breathing is scary.

That 1.2x damage and knockback turns situations where you wouldn't be even close to death into instant stock losses:

Note that this is with Ridley, one of the heavier characters in the game. With Deep Breathing active, any lightweight or midweight characters are at kill percent when they're around 70-80%. Get them at the ledge or pull a combo and that's dead!

If your opponent has some Wii Fit Trainer matchup knowledge, they'll know this and will likely start to play a lot more cautious the second you get Deep Breathing. This is something you can take full advantage of.

Deep breathing increases Wii Fit Trainer's run speed and fall speed, which can take away some combo options. For example, that Nair combo above is not possible with the short hop Nair on the left if Deep Breathing is active, since Wii Fit will fall to the ground before finishing the move. However, she gains far more than she loses.

It's super niche (will only work on large heavies), difficult to pull off and more flashy than practical, but Deep Breathing gives Wii Fit some completely nutty combos like this completely true 0 to death:

It's worth noting that while the different fall speed and gravity give you massive potential, they're also extremely difficult to get used to at first.

When I first picked up the character, I spent awhile practicing combos and moves without Deep Breathing. When I then started playing with her in a match, I found it very difficult when Deep Breathing was active. I would be falling way too fast and landing before my move would come out, or running past where the opponent would land on accident, it was terrible.

It absolutely takes some awareness and practice to get used to the difference. Even now I'll get excited and go in for a move when I see an opening before realizing I don't have Deep Breathing active and I'll try to execute the wrong combo.

So how should you use it?

Wii Fit has been my main in this game and I love her to death. My advice to you would be to get this move out immediately and try to keep it active as much as you can in the game. The time to charge it has been drastically reduced from Smash 4, making it that much easier to get after you've been hit and you're falling back to stage, or as your opponent is recovering.

I actually went back and watched one of my tournament games and found that I used Deep Breathing 20 times in the 6 minute game. This move is incredible--Wii Fit becomes almost a completely different character when using it.

The ranges are based on whether you let the move fully recharge between uses (40 seconds).

14
Is female Wii Fit Trainer's hurtbox still smaller than the male's?
28
How many different ways can Wii Fit Trainer's soccer ball be aimed?
19
What exactly does "Stick Sensitivity" do in Smash Ultimate custom controls?