It's my second try to get the ghast farm attachment to my gold farm working, and it's still bad.

The farm is located halfway up the Nether Top. The first try was a 4-tall chamber below the first floor of the gold farm. The gold farm uses turtle eggs to lure zombie pigmen to a central drop shaft and it works like charm. The first attempt had rails running down the middle of the lower spawning floor, and it failed badly as pigmen would crowd by the rails unable to cross them, and stop the minecart or get grabbed by it. The second try is pictured below: 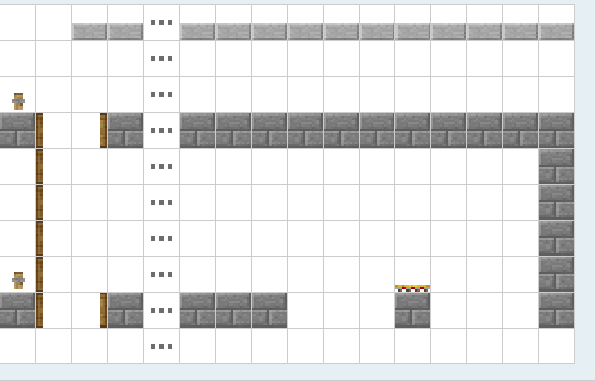 Now the pigmen don't clog it up anymore, happily jumping to their death in pursuit of the eggs (the bottom of which had to be protected by trapdoors from all sides, otherwise baby pigmen managed to land on it). But ghast spawn and don't move - I guess 4 blocks is too low for them. There's a 3-block gap to the rail for the minecart running around the farm (to a kill zone with a cactus and hoppers; tested in creative, works), and another 3 blocks to the outer wall. I'm hoping it's sufficient to keep the ghasts from flying out of the farm and still let the large magma cubes drop down. Now I'm not sure - will dropping the floor by a block suffice to get the ghasts to move, or do I need more? Will I need to move the rail lower too, or can it stay at the same level? Also, should I prevent the rails from magma cubes, and if so, how? Also, endermen started spawning and it's now a matter of time until they steal the sand block from under the cactus unless I protect it somehow... will a glass roof 2 blocks above suffice? How far should it reach?

I've sought designs on Youtube but they are divided between "showcases" that usually show extremely complex super-efficient ghast farms and really gloss over the mechanics, often completely avoiding angles that would show the geometry of the spawning/catching area, or they are just small manual farms where the ghasts getting stuck is a boon.

Not sure this is a full answer, but have you considered using a flying machine to push the ghasts to where you want them? Then you don't have to change the geometry of your system.

10
Why can't I get Zombie Pigmen to spawn?
7
How to deal with magma cubes in the Nether?
2
Farming with an AFK rail
1
How to prevent large Magma Cubes from spawning?
5
Optimal distance to AFK for creeper farm?
8
Is there a relatively easy and efficient way to spawnproof large areas in the Nether?
3
Spawn-proofing the nether-top sheep farm
1
How can I make a power rail inactive when it's next to an active one?
1
Does this Bedrock gold farm design also work in Java Edition?