In The Legend of Zelda: Majora's Mask, there is a piece of art found during the Grandmother side quest that sheds a bit of information on the past history of Termina. 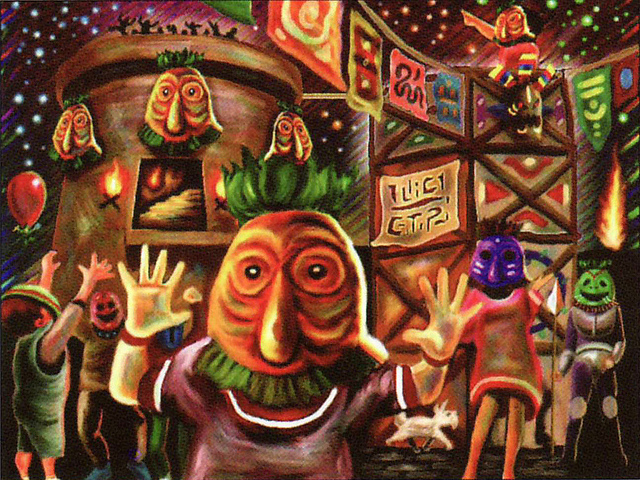 Clearly this depicts the Festival of Time, the wondrous carnival held every year in celebration of the harvest. Several interesting bits are hidden within, such as numerous Giant-inspired masks, Tingle, and a puppy.
More interesting to me, however, is the piece of paper found on the tower with some cryptic lettering on it, as well as a strangely-out-of-place Odolwa's Mask, the mask of the boss of Woodfall Temple. The lettering seems to closely resemble some Ancient Hylian fonts, though there are some strange differences. I was unable to translate it.

My twofold question (or perhaps twinmold?): What might the significance of Odolwa's mask just hanging out here be? And, more pertinently, is the Terminian text translatable, and if so, what does it say?

Browse other questions tagged zelda-majoras-mask or ask your own question.