What's a good strategy for dealing with brambles?

In the lush season of Don't Starve Hamlet some areas are filled with brambles that require the player to take damage in order to remove them. This makes it difficult to deal with other damaging situations and to flee when under attack. 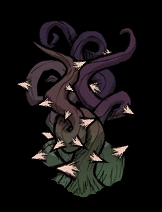 Is there some strategy, other than using Wormwood's Bramble Husk, to removing them without taking much damage?

Some sub-questions that are not as important:

Does a log suit reduce the amount of damage taken when removing brambles?

Is there some range weapon that can be used effectively and cheaply to remove them?

Wearing armor and a helmet provides the same defensive benefits against brambles as it does against the attacks of other enemies even though the damage is a result of an attack.

Typically in Hamlet, I run around with a football helmet and Weevole mantle in case vampire bats swoop down to attack me, which they do constantly (perhaps the game is a little excessive in the number of bat attacks). The football helmet just uses a rope and pigskin which is easy to obtain from the near constant stream of dead vampire bats. While the Weevole mantle is a little harder to obtain, it allows the use of armor in the humid season. Together they reduce damage to about 8 percent which should allow relatively easy clearing of brambles. That means one takes about 1 damage each hit and it takes about 3 hits to clear a section so you take about 3 damage per section.

Usually I keep my backpack near by and switch back and forth from the Weevole mantle with the football helmet to clear a section. Its good to make sure that you have a clear means of escape in case the vampire bats attack, so you want to have a clear exit strategy while clearing brambles and afterwards.

Not the answer you're looking for? Browse other questions tagged dont-starve dont-starve-hamlet or ask your own question.

12
How do the Ents spawn and what's the best way to deal with them?
5
Is there any point to catching rabbits with berries?
3
Are books only good for one use?
7
Does the Screecher mod for Don't Starve have alternate endings?
8
What is up with these pigs?
8
What can I do with killer bees?
7
Does the sanity boost from friendly pigs stack with multiple pigs?
6
What is the best strategy for escaping Tall Birds?
10
What's the objective in Adventure Mode (inside Maxwell's Door)?
5
What are some good foods for the winter?