What's the Pac-Man-like video game seen in the movie "Joysticks"?

I recently watched the 1983 movie "Joysticks." It was largely a waste of time, but I'm curious about one particular video game that was shown repeatedly (see image below). From the glimpses of it that are shown, it appears that the goal is to collect all of the dots, à la Pac Man, but we never see anyone complete a level, so who knows.

Is this a real game? I've played a lot of stand-up arcade games in my day, but this one is totally unfamiliar to me. I'd almost suspect the producers of having mocked up this game just for the movie, if the production values of the film weren't so low. 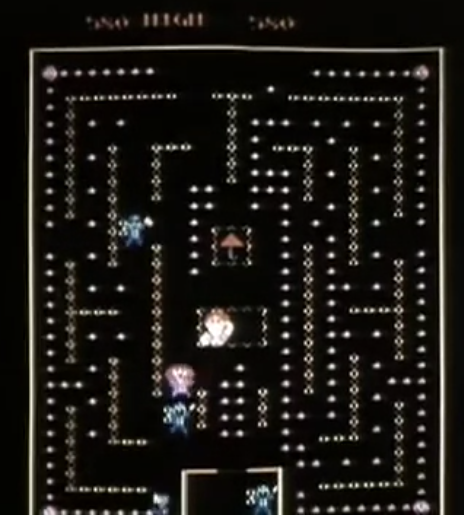 Hmm, interesting. I haven't seen the movie, but the imdb page says, they made a deal with Midway and had license to use pacman, super pacman and the at the time of shooting unreleased satans hollow. Source.

The arcadecinema page of Streaking says this:

In the movie Joy Sticks, an apparent clone of Streaking (credited to Computer Kinetics Corporation) is played in several scenes, and is referred to as "Strip Video" (or "Stripper Video Game" in the credits).

Since I'd seen Joy Sticks prior to Streaking being added to MAME, I was shocked when the game showed up on the MAME WIP page. I had no idea it existed beyond the movie. Given the little information that's available about the game, it's unlikely that it was ever widely distributed.

There are several apparent differences in "Strip Video". The player can be either male or female. The character starts out clothed, and loses clothes as the game progresses (as do the characters in the movie). The gameplay also seems considerably faster, and there is no Fatigue meter, both of which would have helped Streaking considerably. Finally, the color palette is different, but this could be attributed to an incomplete MAME driver.

16
What's the video game in the movie "Big"
13
What's the arcade game Kate and Dade play in the movie Hackers?
6
Identifying Android game seen in Fast & Furious 7 movie?
16
What game is this as seen in Charlie and the Chocolate Factory (2005)?
15
What iPad game is this using joysticks on the screen?
5
What game is shown at 10:22 in the video titled 'The Gaming Crash is coming'?
4
What's this game shown on the Apple iPad page/website
17
Who is this character shown on the Video Games The Movie movie poster?
43
What game is this character in the Pixels movie from?
17
What's the name of this game in the photo?