How many skill points does it take to level up?

It doesn't seem to be consistent how many skills I must level up in order to gain a character level. It also doesn't seem to be a whole number, since I currently have about 2 pixels of bar left to get from level 3 to level 4. What is the formula like for determining when the character gains a level, based on what skills level?

Every time you level a skill you earn the level you earned in XP to level.

Example: You just earned level 26 in Smithing. This will give you 26 points of XP toward your next level.

The number of XP to level for a specific level is equal to the following:

This would mean that you would require 875 XP from leveling skills to reach level 33. One thing to remember is you will probably almost never start a level at 0 XP because of XP earned from the last level. This means that while 875 XP would be required it will take slightly less than that to actually level.

Just a notice... I did not come up with this information but as far as I can tell it seems exactly correct. I found the information here:

Note: I am using the term XP arbitrarily seeing as there is not any place within the game (that I am aware of) that actually refers to XP.

Note 2: I think the difficulty with leveling over 50 is that 50 is not very far from being half way to earning the Max number of Skill levels earned. I think the number 50 was probably just a rough estimate (being a "nicer" number than say 53 or something like that). Also, considering if a player would normally focus on less than half of the skills than after maxing some you would begin leveling lower level skills around this point. This would amplify the perceived needed skill levels to level because you would be gaining less XP toward your next level from these lower level skills. All of these things combined would mean that to a player the perceived XP to level would seem higher. This perception could be offset a bit leveling all of the skills evenly while progressing through the game. Though... it is still only perception really and it could have other implications like some of your skills being to weak for the current progression point that the enemies are at.

As for leveling skills my guess it is probably the same type of linear increase for XP to level but that information would be much more difficult to derive. Now... if there were only a console command that would spit out these values.

Since this was not marked as an answer and rightly so... I decided to do some testing... actually reversing the entire calculation using my skill levels to which... in theory... should give me exactly what level and how far I am to the next level. Though I have no way of knowing exactly what percent I am to the next level... judging from how far the bar is... it seems exactly correct.

To get the the Total XP required to reach a level I came up with this additional formula (which I simplified as much as i could):

Also, to get the Base XP you start with in the game (because skill levels do not start at 0) I came up with the value 2815.

So... to test with your own character... calculate the acquired XP from every skill. Add them all together. Subtract the starting value (because this xp did not get earned and did not count toward level 2 (from starting at level 1).

Calculate the amount of XP that was required to get to your current level... then calculate the next level. Your current XP value should fall between these 2 values. You can also easily calculate the percentage you are to the next level using what you have and compare your calculation to an approximation by looking at your bar in game. Just for notes I will also post my scrap notes from my calculations when I did it for my character.

Another way to compute this : When you try to estimate how many XP you earned from a skill you just need to add each skill level above the starting skill level : Exemple : A skill started at 15 and now is 18 so :

So I read through GoblinLord's accepted answer and tested it. It all works great and matches my own character. I just want to add some supplementary information, but I realize that doing so would really change the content of his post. This is about what the mechanics mean in practical terms.

The one thing that I found most interesting is how the actual math explains several things.

The soft cap
It exists insofar as leveling becomes progressively more difficult, but there is no mathematical change at any point. However, as you near 100 in your favorite skills, it becomes essential to start leveling the more underused skills. You need around the same number of new skill ranks to level up, but those ranks are harder (or at least more time-consuming) to achieve. But there's only a small difference between going from 49 to 50 and 50 to 51. 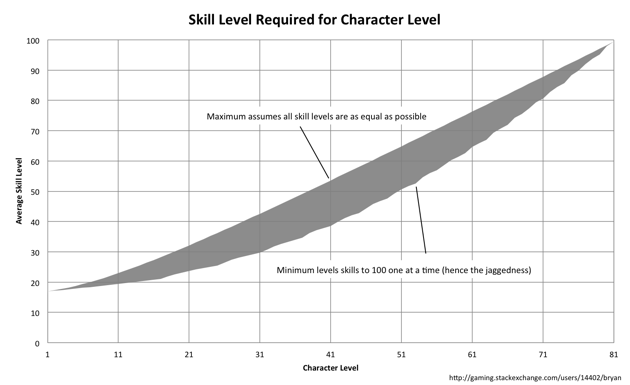 How many skill levels
As opposed to focusing on skill points, you can look at levels. Again, assuming you level everything equally, after around level 25 you start needing around 20 additional skill ranks for one more level up. (You can cut that in half if you're leveling only your best skills.) 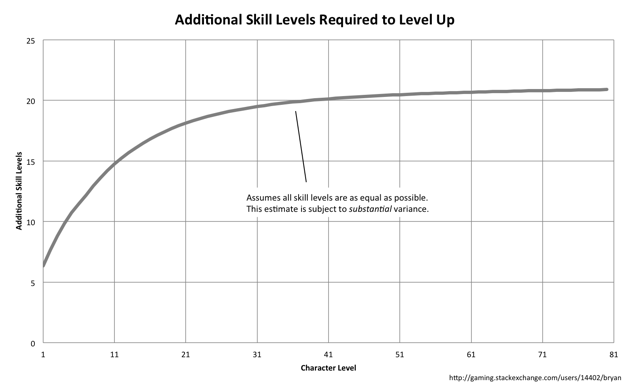 There is a fairly comprehensive article about Skyrim's Leveling up on UESP.

Excerpt from the article:

I think the mathmatical answer to this question is actually a formula (that I don't know) as Todd Howard, Bethesda's game director, says

The levelling is faster. Oblivion and Fallout 3, we think of them as 1-25 games. This is a 1-50. But what that means is we just sped it up. It's not like it's going to take you longer. There are so many perks and the power really comes from the perks, we wanted to get it going faster. You level faster in the beginning and then it slows down.

As found in this article.

0
leveling up in skyrim
3
What's the least skill levels that will result in character level 81?

18
How do spells affect skill leveling?
13
Does dualcast double gaining skill level?
10
What is the difference between a Dremora summoned with the Conjuration spell and one summoned from the Sanguine Rose?
3
How many souls does it take to recharge a staff?
4
Does “Summon Arniel's Shade” Level Conjuration Skill?