So once I was inspired by some game on another platform to make it's parkour moves in minecraft. I knew that without commands, I was not able to do it. Luckily, I have done some commands before and thought that it was possible with the command /execute.

Some time later after experimenting with commands to come up with how to boost the player up, i run into a problem.

I decide to make it a little more realistic by making sure that the player only jumped high when he/she was looking up. So of course, I try this command:

I tried it, but it seemed that it did not run the command when I was looking up. Since i'm a person that was discouraged from trying other choices, I came here to ask,

What is the command?

This is not a bug. You just need to think of the axis to be threaded and try to screw it in somewhere: 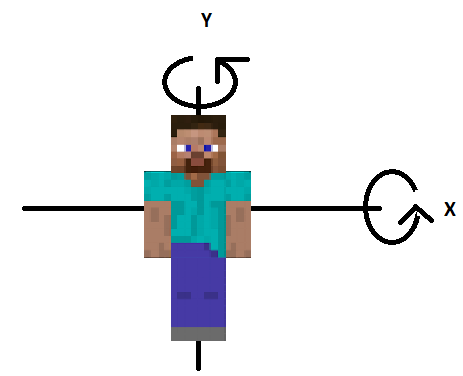 If you rotate X the player will look up or down and rotating Y will let them look left or right.

1
I need help with /execute
2
Minecraft: Special Characters in Target Selector Arguments
0
/execute as - Failed to execute error
3
Minecart ejection and deletion?
0
Detect when a player respawns, Possible?
1
How do I execute command for villagers with certain NBT tags?
1
How do I summon projectiles (specifically snowballs) above mobs in a certain radius when I am holding a certain item?
0
How can I make an execute command there is a player looking at another player?