How do the round systems work?

Seeing some preview matches of Teamfight Tactics, it seems the round system is not like in Autochess. In auto chess, the round are just a number, where in TFT it seems to use a 'Mario Bros' system.

So what are the max number of rounds in a 'chapter' (to keep the Mario Bros analogy) and what is the logic for passing from a chapter to another?

Is it a fixed number of rounds per chapter (If so, how much?) , or does an event finish the chapter?

Each chapter (to keep using that terminology) has six rounds, except for the first, which starts with a draft pick (everyone picks at once) and then three minion rounds.

Round six of every chapter except for the first is a monster round (Krugs, wolfs, Raptors, a dragon, Mechs, Rift Harold, the Elder Dragon, respectively).

All the other rounds are PVP.

To illustrate this, I took screenshots starting at the first chapter with PVP and ending at round six. Not showing rounds thereafter because all other players were eliminated by then. ;) 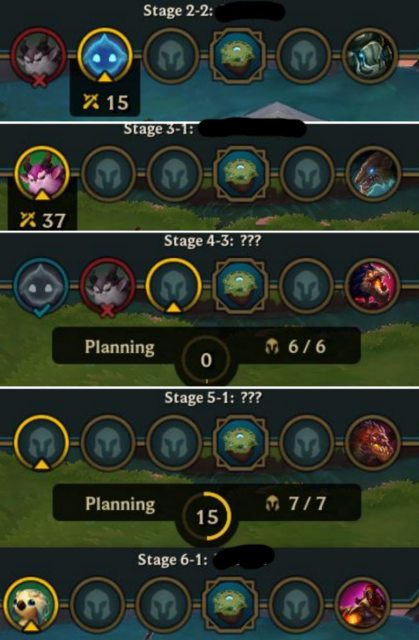 Source: Rankboost (note that they use zero-based numbering and as indicated in a comment, they leave the chapters out altogether)

The rounds, as far as I see, work like this.

Chapter 1 is a Carrousel, then 3 rounds of PVE.

Then, every other chapter works like this: 3 rounds of PVP against a random opponent, Carrousel, 2 rounds of PVP, then a PVE boss.

Not the answer you're looking for? Browse other questions tagged teamfight-tactics or ask your own question.

1
Does titanic hydra also do damage to the main unit hit or only to the surrounding units?
2
Does Red Buff stack and how long does it last?
2
What happens after round 7?
1
If you do not pick up the gold, do you lose it?
2
Is the character deck common or individual?