How can I defend against a tsunami?

A number of maps have a large flat plain near a coastal area, which is often among the best places on the map in terms of land value or resources to build, with the drawback of being susceptible to a tsunami. While disaster shelters can help save citizens, even when the shelter is trapped under meters of water for years without food, the buildings aren't so fortunate. Most buildings can be flatted by even a medium-strength tsunami.

What tools can I use to blunt some of the force of a tsunami wave?

Obviously I can landscape a giant dirt wall in front of the water, but this looks horribly unnatural and requires shifting large amounts of dirt around. Are the other landscaping tools available effective, such as flood walls or dry canals? If so, how effective are they?

I tested three tools to try and mitigate the impact of a tsunami:

In summary, canals were by far the most effective, although all three tools had marginal impact on their own. Multiple layers were more effective than a single layer - e.g. the difference between 0 and 1 canals was small, but the difference between 1 and 2 was substantial. The number required will also vary depending on the map terrain and tsunami strength.

As an aside, it’s worth noting the “disaster risk” overlay does not accurately indicate which buildings are in danger of destruction. It appears to be based on elevation, but doesn't account for other terrain on the map altering the flow of water.

For my testing, I used the “Marin Bay” map. I purchased the column of tiles to the right of the starting tile, which contains a long stretch of mostly flat land. I built a road traveling from north-to-south down that column of tiles, with intersections every 20 units to help measure differences in floodwater reach. (For reference, a tile is approximately 240u x 240u.) At each intersection I placed a medical clinic, since it’s a low-height building that’s roughly as susceptible to collapse as low density residential. All tsunamis launched were targeted at the same area and of magnitude 5.0. 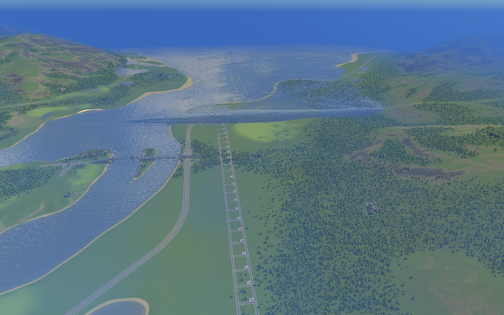 My control tsunami was launched with no defenses built, just to see how far the water would reach. Turns out a 5.0 tsunami can make it all the way to the top region of the bottommost tile, where the elevation finally begins to rise. But, since the goal is to test the relative impact of the water defense tools, I let the waters drain, rebuilt all crushed hospitals, and began testing various defense configurations.

In all, I tested the following:

All canal water pumps were on a separate network connected only to fresh water outlets set up to drain the water away from the action. I also set the water budget to 150% (so each pump had a capacity of 150,000 cubic meters/week). I did not test pumping trucks as the AI for them can be rather dumb, so they seemed too unreliable to use as a defense in a real city. (For post-tsunami cleanup they are okay.)

As an aside, it appears a tsunami wave doesn't lose force/velocity as it travels across flat terrain, though it does "bleed" water as water gets left behind. Gains in elevation do reduce wave strength. So the overall impact will vary depending on the map and city design.

My hypothesis going in was that flood walls would have a minimal impact. They’re great for all situations where the water level doesn’t exceed the top of the wall, but once water starts leaking over, the water physics in the game appear to treat it as a continuous body of water, and so velocity is preserved for water on both sides of a wall.

This bore out in the testing, as a series of five flood walls saved a single block from devastation, compared to having no flood walls at all. The difference in performance between one and five flood walls seems to match the water physics observation above. So long as the water level doesn’t exceed the top of the wall, the wall can push back, but the height is not nearly enough to stand up to even a magnitude 3 tsunami for very long, so the overall impact is minor. 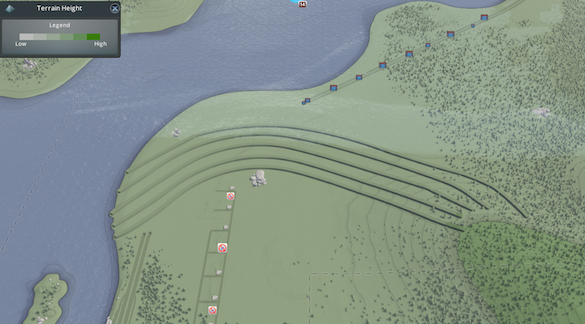 Flood walls can potentially backfire too, preventing water from draining out of the city after a tsunami has passed.

Pumps work great for draining things, and you can visually see them suck up all the water in an area if you cluster enough pumps together. The theory here was that pumps could help remove water from the water wall, limiting the distance and force of the wave.

They did, outperforming the flood walls by a factor of 3 (saving three hospitals instead of one). Below I marked off the last building for each configuration that was destroyed and also the furthest the flood waters reached: 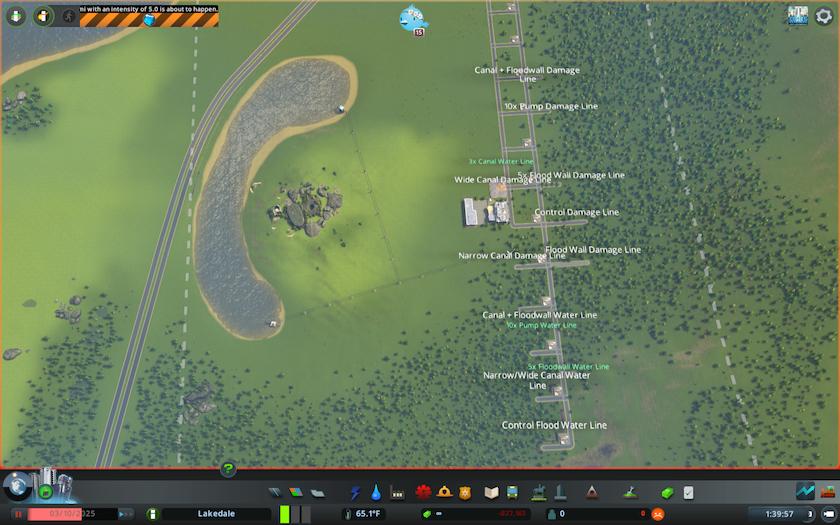 All the canals I used were of the deep variant. The goal here was to soak up a bunch of water but also provide a "wall-type" effect when the wave of water ran up against the far wall of the canal. Something I've noticed through regular play is that meteor craters do great at breaking up tsunami waves, so I wanted to replicate that with artificial constructs here. That's also why I didn't spend too much time with shallow canals - they simply don't absorb as much water as the wide canals.

I first attempted a series of canals, then later added flood walls to the far side to try and better replicate that crater wall effect.

One canal was as effective as the five flood wall configuration. Two canals were much better, and it wasn't even close: 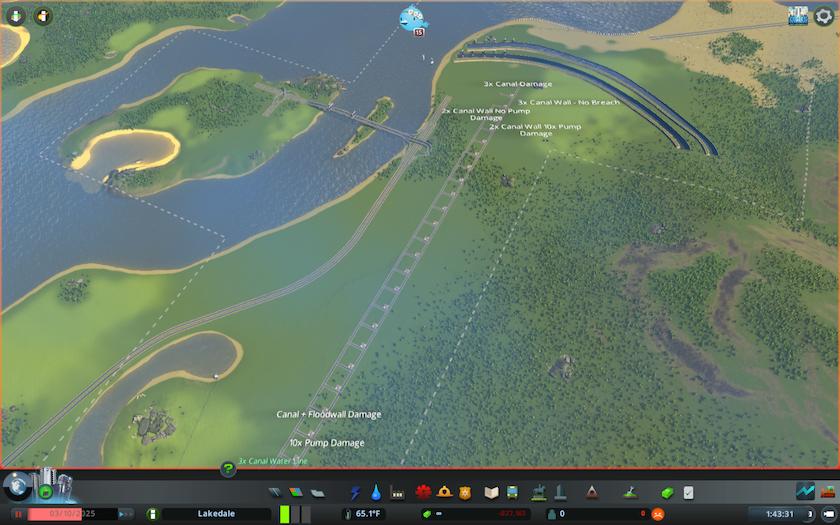 That's a 360 unit difference (tile and a half) where all those buildings did not collapse. I stopped tracking the water line here after realizing water was leaking in from the river bend, which still had an unbroken wave. Despite this, the water that leaked in was too shallow to crush any buildings.

With the three wide canal + three flood wall combination, no water even made it past. (All pumps were disabled during this test.) 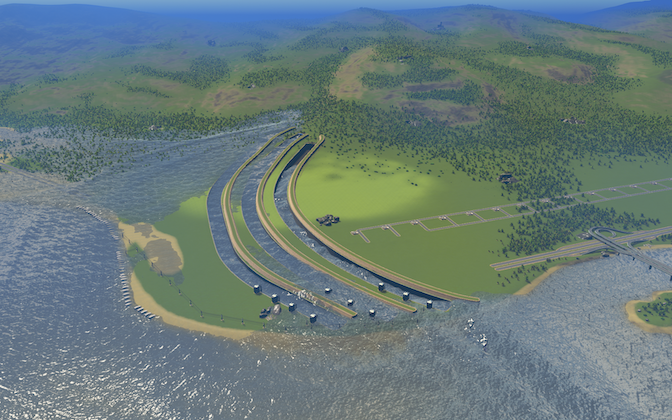 Multiple canals with flood walls are the best

The exact effectiveness will vary with the map and the strength of the tsunami. In this map, three wide canals with a trailing flood wall are enough to blunt a magnitude 5.0. More would be required for a 10.0.

However, this setup also takes up a lot of space and is a bit of a pain to build around. For my testing, I didn't have any actual traffic, so I demolished a large portion of the highway to make room for my canals and flood walls. On a real game, I don't know how practical this would be, unless there's a large zone of unused space between the coastline and a city built on low, flat terrain.

And it looks only a little bit better than a giant wall of dirt, though it is much cheaper to set up.

0
How can I make the zoning colours more distinct?
27
How can I fix pollution?
12
Can Chirper messages be limited to only relevant messages?
10
My highway is backing up. What can I do?
3
How can I stimulate Industrial growth?
5
Can cargo trains and passenger trains share the same line?
10
Can a train cross this junction?
6
Must I have cemeteries / landfills or can I use crematoriums / incinerators exclusively?
0
Can trains use tram tracks in cities:skylines?