Is the amount of followers limited?

I've just got my first follower, and I'm wondering if I can get a second person to follow me. Is the game limited to one or two follower(s) or does it allow for a large number of followers? It really seems handy to me to have some followers protect me when I draw attention from a larger group, or when I try to steal something where I really shouldn't...

PC players can use the console to allow more than one follower at a time. After obtaining a follower, the PlayerFollowerCount global varable is set to 1. Setting it back to 0 will enable you to obtain another follower.

The game limits the amount of followers to:

If you want to expand the original recruitable follower limit the mod below solves the problem:

Extensible Follower Framework is a mod that allows up to 100 Dovahkiin followers. In the following picture 16 of them are chilling at Breezehome, Whiterun. 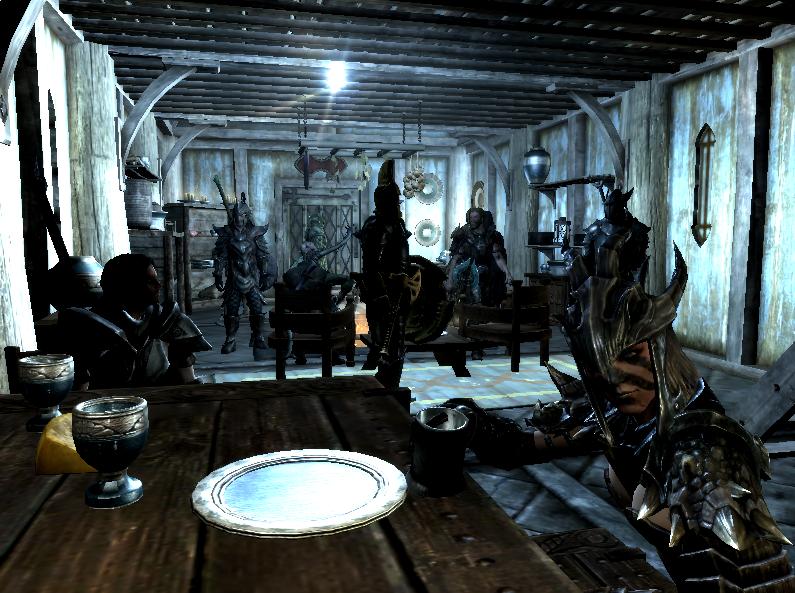 Isn't the game too easy then?

Not exactly. Keep in mind attacking and bleeding are key factors to level up. That means you're still very vulnerable to strong attacks but still won't waste your time dueling boring enemies. This mod has a greater level of awesome against multiple enemies featured by war mods.

I had a pretty big party rolling down the land of skyrim. Riding the immortal horse Shaddowmere, find Barbos the immortal dog (just don't complete the quest and he follows you to the end of the game).

At one point in the main story you get the option to travel with Delphine and the other blade Esbern, who summons 2 Atronaches. I found a hunter whose friends were torn apart by bears, give him a potion and tell him you'll avenge his friends (don't finish the sidequest) and he follows you till the end of the game. Master conjuring to get two Atronaches plus your follower using a staff of the familiar and bam: 11 man party:

You can only have 1 follower at a time, without glitching. If you try to recruit more, they will say you already have someone.

I know in previous Bethesda games you could glitch out and get 7-8, but I do not think it possible in this one.

"Permanent followers usually become available after you complete a quest of some kind. You can also find mercenaries for hire in the cities and recruit certain creatures in the game. You can have at most one permanent NPC follower and one creature follower at any time.

Some NPCs follow you temporarily for the duration of a quest. If you avoid completing the quest and go somewhere else, they may follow you around. As many of these NPCs are unkillable, and you can have several followers at the same time, you can use them to fight difficult enemies in a different questline.

Potential followers will say that you already have a follower and be unable to join you if you are on a quest that gives you a temporary follower. In such cases the quest follower already occupies the follower slot until the quest is completed. For example, in the Proving Honor quest, Farkas will occupy the follower slot even if you have not yet gone to meet him at Dustman's Cairn. The slot can be freed again simply by completing the quest so that your temporary quest follower leaves your service."

Source: UESP wiki, "Followers" article
You can allow more followers using the mod, UFO - Ultimate Follower Overhaul. One of its features is:

Amount of followers you can have accompany you has been raised to 15 (not including dogs or quest NPCs).

I happen to have 2 followers (that I can trade with) without any cheat or mods, not sure if it's a bug though.

I had Serena from the Dawnguard expansion. She is a quest NPC, but at the same time I can dismiss her, so I thought she was acting as a normal follower. So I took her in my team a while ago.

Recently I finished a quest with the khajiit Kharjo and upon completion he offers me to join me if I wish. I accepted thinking Serena would leave my party, but then both stays in, so it gives me more storage space.

I'll keep it like that for a bit if they are not too much in my way all the time.

21
In Skyrim, how many followers can I have? And where do I get them?
-2
Skyrim Follower More Than One
-2
Two followers glitch

3
Is there a finite amount of followers in the game world?
1
Skyrim switching between followers
10
Will followers drown?
7
Is there a way to limit the amount your followers talk in skyrim?
5
My follower attacks me when I pick up stolen items in my house
2
Skyrim Followers