I know this question has been asked a lot, but I still can't find an answer to my specific problem. I have attached a photo: 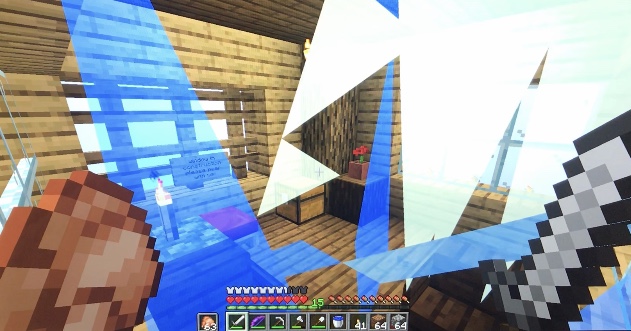 As you can see, the flashes go behind the items that I'm holding which is a bit weird, and to me, means it is not a problem with the actual laptop, and maybe it's a problem with the actual application itself. They happen at random and seem to reflect whatever environment I'm in; if I'm in the nether, the flashes are red, if I'm in a cave, they're grey. Note that my laptop isn't a gaming laptop, but it's still relatively high-end and should be able to take some light gaming. I have also tried to adjust the video setting on Minecraft itself to no avail.

Do you have any mods installed that could cause this? Any modifications to the client could cause undefined behavior. It also could be caused by limits of low-end video memory or display driver corruption in general. Please update your display drivers and restart your computer. Also you should mention the things you have done prior to the issue.

6
Minecraft 1.6.4 - Different mods on different profiles on the same version [Linux]
4
Allocate more RAM to Minecraft with Forge
1
Improve performance for an underpowered Minecraft server
1
Minecraft world flickering
1
Screen flickering in Minecraft
0
How would I combine the effects of both scanning a block under a player and if they're holding an item?
3
Minecraft running at 2 fps; more than sufficient hardware specification, lag-o-meter maxed out during rendering pass and sporadic memory access errors
8
Minecraft Launcher won't open at all