Is alien interaction limited to the same 4 dialog options in No Man's Sky's "Beyond" update?

This question is specific to the Beyond update to No Man's Sky. I'm playing on PC.

Prior to the Beyond update, when you interacted with an alien in a space station, you'd see a bit of flavor text, and the options you received were somehow related to the flavor text. For example, the alien might say "i have lost all of my <something>" and the flavor text would say that the alien looks at you hopefully and there would be an option to offer to help the alien find its <something>. Or it might say, "the alien looks like at me with fear and terror in its eyes" and you'd have options to either panic, or attempt to calm it down.

However after the update, while the flavor text and dialog are still present, I only see the same four options when interacting with the aliens:

It's kind of jarring. For example, right now I'm talking to a Gek and the flavor text says:

The Gek is a miserable sight, a picture of dismay and desperation. They look at me in a way that begs for pity.

Prior to the update, I would expect my options to include a set of "give <resource>" options. Now I only see the 4 options listed above which are completely unrelated to the dialog or the scenario posed. Regardless of the flavor text, it seems like these four options are the only options available for all space station and almost all planetary trade depot/settlement aliens. As far as I can tell, it's no longer possible for one of them to give you a secondary random quest.

Is there a way to interact with the aliens beyond the four dialog options listed above? 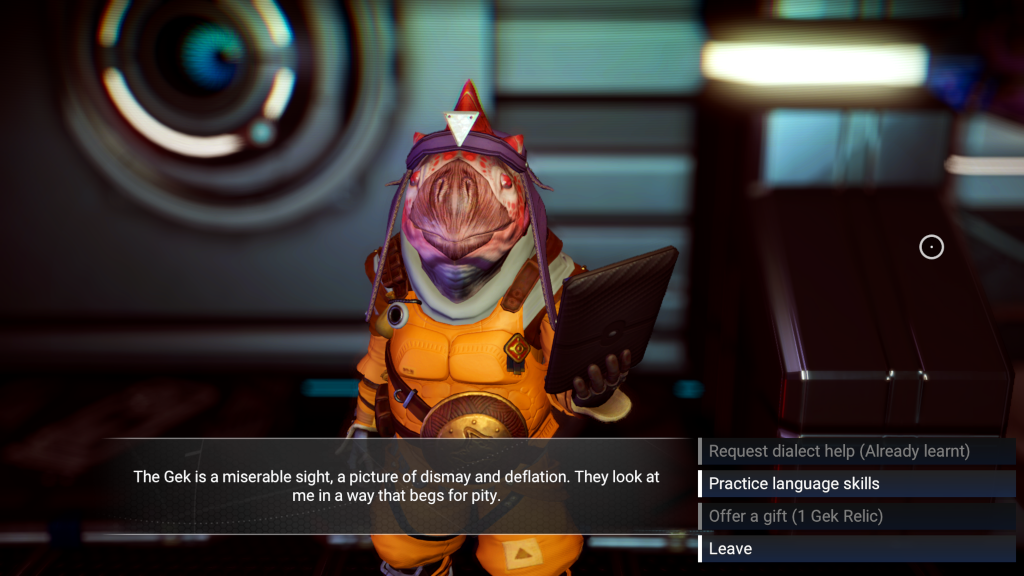