What repeatable activities are the most profitable?

In Red Dead Redemption 2 it can be hard to come up with cash for camp upgrades, purchasing weapons, provisions, and cosmetic items. During the hard times for Dutch and the gang what can Arthur do to bring in more cash?

While I know that hunting for gold bars is a lucrative activity, but once the treasures are found it will be difficult to find anything else as valuable. Alternatively, activities like hunting or collecting herbs are both bountiful and repeatable, but neither is excessively profitable. Profits from hunting seems to cap out at around $10 per trip to the butcher - hardly enough to pay off the bounty I'll have accrued along the way.

I'm in need of money. What work - honest or dishonest - can I do to get some cash?

It appears that there are not too many activities that can net a large profit. Holding up stores is a profitable albeit risky method of earning cash. For a larger payout I feel the best way to earn extra money is to complete random encounters and looting gang camps.

In Lemoyne, for instance, during a random encounter Arthur can steal a cart loaded with dynamite from the Lemonye Raiders and sell it to a wagon fence for a hefty profit. Other encounters have delayed payouts such as healing a man bitten by a venomous snake who will pay for anything purchased from Valentine's gun store. I encountered a different stranger in the same predicament near Rhode, and later a third near Annesburg. After saving them they each allowed me to make a purchase from the general store and guns store, respectively, on their tab. While not all of these encounters are repeatable most of them seem to be, and they often pay well.

Additionally, following trails of smoke may lead to a gang camp. There will be between five and ten enemies at a campfire encircled by a wagon and some tents. Killing these opposing gangs and looting their corpses often provides Arthur with $50 worth of supplies that can be sold to a fence. Each of the camps appears to respawn in about a week's time. The only concern is that none of the camps have a guarantee to appear so you may ride towards smoke only to have it be a single stranger with nothing of value.

While there are not a lot of repeatable activities that pay well, there are other activities that have enough encounters to sustain Arthur's appetite for cash. There are 16 legendary animals that pay between $20 and $60 per kill, in addition to normal hunting completed on the trip. There are 20 stores which have extra mechanics involved with the robbery. For instance, the general store in Strawberry has a secret moonshine operation which will reward Arthur with an extra $50 if the robbery goes smoothly - a nice bonus. It is possible to run out of legendary animals to hunt and side-hustle business to rob there are enough that I feel I can satisfy Arthur's need for money before the list runs out.

Ok this one I have mastered. If you have a bounty in Lemoyne you can lure the bounty hunters to a bridge in the northern region of Lemoyne as indicated on this map: 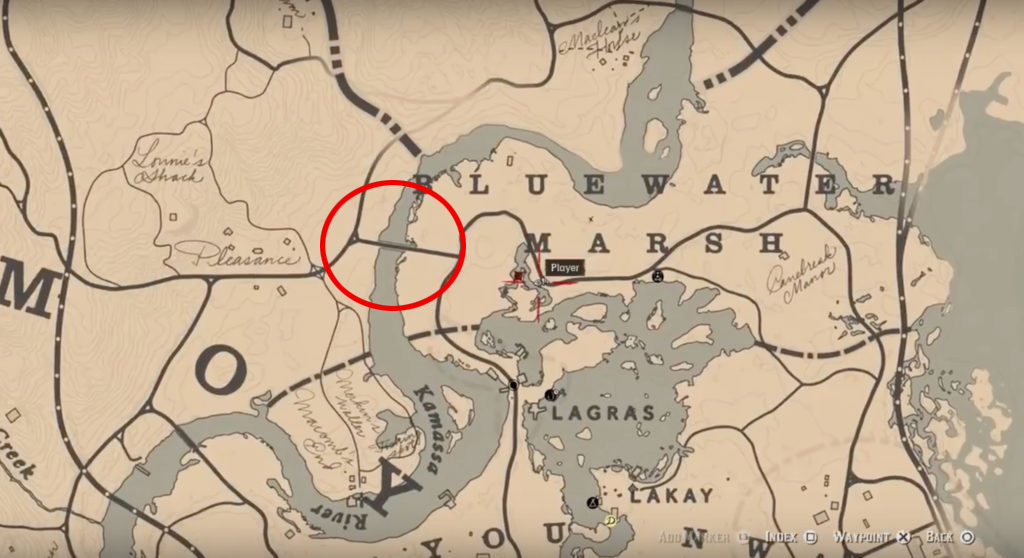 Stay on the west end. Grab your Lancaster repeater. They all come over the bridge on horseback and give you ample time to pluck them off as they ride virtually single file over the bridge into their deaths. If you kill a horse, loot the saddlebags as well. Sometimes you get gold nuggets from them. The hunters usually always have watches and belt buckles from silver to platinum, plus they carry cash.

I usually ride the road on this map where the player is from one bridge to the other that crosses through the word "Water" on the map. Eventually bounty hunters spawn and I rush to the closest bridge and do this all over again on both. I almost never take even a single hit, rarely have to use dead eye, and the game never stops giving you goods like this. After 4 or 5 spawns they start dropping tonics and no more rings or buckles. When that happens, ride back to the fence. I use the one in the west because I'm not wanted there but there's also one a little north on the coast. Each run I net some $150 to $200 including the money the guys have on them when I loot them.

If you're not using dead eye, this free firing builds your shooting experience, and also lowers your honor bar every time you loot someone. I personally don't care that I lose the honor. It just pays way too well.

I did this for a few hours, upgraded everything I can in camp, paid off all other bounties I had on the map and leave Lemoyne with a huge bounty just so they will keep sending guys after me. Anymore, money is no longer a concern for me in the game.

Don't forget, if you're heading to town to buy bullets, remember to snag a 3 star elk or something before heading in. You'll get something like $12 from the butcher for the perfect corpse. You can hold one big corpse on your horse, but what seems like infinity pelts, and 2 slots to hang birds on the sides. Plus, you can fit a ton of small critters in your bag. I always murder and skin any animal with a 3 star rating. Use the varmint rifle for small things like rabbits. For pigs, deer, etc, use a rolling block rifle and aim for the head.

Using these tactics, you will never need to worry about money again.

I should also mention I have reached new levels of depravity. Just for the challenge, I ride the streets of lemoyne and fire off some revolver rounds into the sky so the witnesses will alert the police. When they start to chase me, I charge straight up the map to the bridge by the E in water and continue to slaughter them as they arrive. When you do this, the police will come after you for maybe 5 or 6 spawns back to back so you don't even have to wait for the bounty hunters to find you again. Bounty hunters can be several minutes in between spawns. The police just keep coming. Let the bodies pile up. You eventually get good enough to loot a few in between waves but don't prioritize that. The bodies will wait for you. Remember, it's just a game, so don't feel bad about shooting down all their horses as well. As a bonus, their bodies rot and you eventually have one nightmare of a bridge covered in skeletons for your amusement. Any time a stranger is passing by, shoot them in the leg or something. They run off and notify more police and the heat begins again. You can keep this up as long as you have the ammo and the space to stash the goods. Check your butcher in your camp. He can make a satchel that doubles your loot storage (or more). It is definitely worth doing the hunting chores needed to get that made.

Know your limits though. Don't forget that even in the pure chaos of battle you can quickly open your satchel and drink down some miracle tonic or chewing tobacco to refill your deadeye instantly. Nothing will anger you more than taking down a hundred men only to lose all that loot because you got sloppy.

Always keep in mind that the citizens and creatures in the Red Dead world have no memories and they all respawn like they're stuck in groundhog day. You might feel a sensation of remorse when you start shooting down horses or strangers simply to trigger a massive attack. But as soon as you no longer want to test your warrior limits you can pay off the bounty and it will be as if it never happened. There really is no consequence to farming this way, so do as you must. With the doubled satchel, I can pull in some $400 + each run. In this game that's practically retirement money.

My personal GOTO in chapter II at the moment is just stealing wagons near Emerald Ranch.

Its close to the border, so if I have a bounty I can quickly cross the border to be safe. I usually "hunt" in the marked area with a scoped rifle, just sit on a hill and see if anything aproches the intersections. Headshot the owner, follow the runaway wagon. Quickly take the wagon off road so that no one will link you to the crime(s)

Try to single out the wagons so that no witnesses see you taking the wagon or looting the corpse. Leave the corpse if its to risky. The wagons go for $15 - 25 - 40 and sometimes there is an option to loot the wagon aswell. 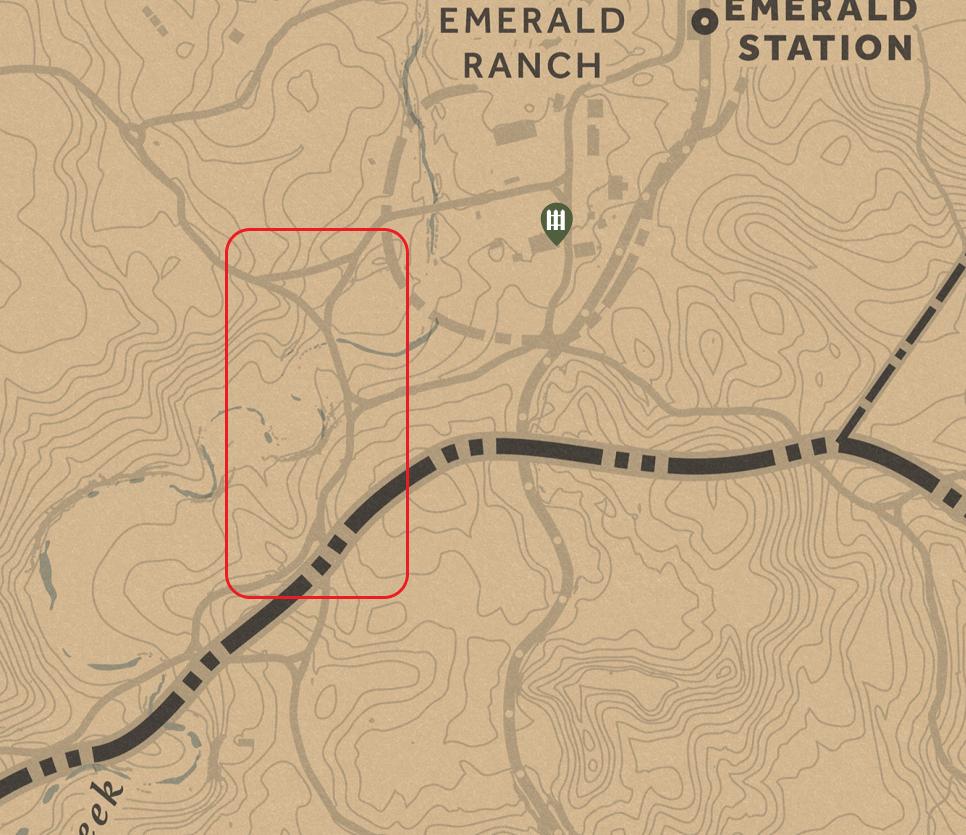 Not the answer you're looking for? Browse other questions tagged red-dead-redemption-2 or ask your own question.

1
What are the different types of horse breeds?
6
What is the red and white bar on the status screen?
16
What are the pros and cons of skinning an animal in RDR2
5
What are the differences between roaming free in the early chapters and after epilogue chapter 2?
1
What really happened on the boat in Blackwater?
2
What exactly is carried over into the Epilogue?
2
Are pickpocket encounters repeatable?