How does Taric gain bravado?

Bravado: INNATE: After casting an ability, Taric's next two basic attacks within 4 seconds gain 100% total attack speed, each dealing 25 − 93 (based on level) (+ 15% bonus armor) bonus magic damage and reducing the cooldowns of his basic abilities by 1 second.

Q: PASSIVE: Taric stores a charge of Starlight's Touch periodically, up to a maximum of 1/2/3/4/5 at once. Bravado empowered attacks grant one charge.

This Taric has 2 bravado charges/stacks/units of bravado

What it doesn't explain is what you're supposed to do to actually gain bravado in the first place...

It actually says it in the description:

After casting an ability, Taric's next two basic attacks within 4 seconds gain 100% total attack speed, each dealing 25 − 93 (based on level) (+ 15% bonus armor) bonus magic damage and reducing the cooldowns of his basic abilities by 1 second.

So after using any of your normal spells (Q,W,E,R) you will trigger the passive which will empower your next two basic attacks. Note that summoner spells and item actives won't trigger Bravado.

With the exception of armor (damage scaling), most stats won't have any direct impact on Bravado but you can affect them indirectly with attack speed and cooldown reduction.

In general the purpose of Bravado is to promote a playstyle in which you are weaving in spells between your auto-attacks in order to buff your damage and utility. You can't have more than two stacks at any point in the game but you can get more out of it than the tooltip suggests.

The two "stacks" you see are how many empowered hits ("[...] Taric's next two basic attacks [...]") are available for use. After activating Bravado by casting a spell, you gain two empowered attacks. The counter then decreases after each attack performed.

Bravado is the name of Taric's passive 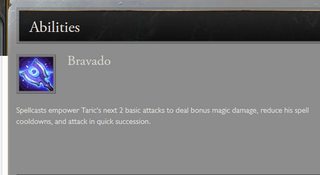 So to gain Bravado, Taric simply needs to cast a spell. Upon gaining Bravado, his next two basic attacks are empowered. This can be refreshed by casting another spell. Taric cannot gain Bravado stacks (Bravado is not a stacking buff), but it can be refreshed. The icon simply signifies how many remaining empowered auto attacks you have left due to Bravado.

This works the same way as Lee Sin's passive does where his next two auto attacks after casting an ability restore energy and give attack speed.

4
Does Cho'Gath gain stacks from ulting clones?
3
Which AD carry does Taric go best with?
3
Do Leavers gain rewards?
4
How viable is Taric as a Support in higher level of play in comparison to, say, Soraka?
4
How much damage does Hecarim gain from ghost?
8
Does buffing grant you Turret assists?
0
Gain of essence reavers cdr
2
Xayah's Passive Damage
2
Exact range of XP gain?
1
Sona-Taric bot lane in Season 9