Is it possible to obtain the Terrain Manipulator without leaving the first planet?

As you know, NMS is a game that's supposed to be played the way you yourself want to play. Your own pace, your own goals. Well, my goal is to never leave the first planet and still get to do as much as possible.

I've played the game several times before, I know I'm missing out on a lot of stuff in space, but for this "playthrough", that is fine. There are several metals and Buried Technology Modules I need to aquire to keep on having fun and expand my base, and these require the Terrain Manipulator (TM). Chromatic Metal from copper being the most crucial one.

Can this be done?

-If I raise my standing with the Gek to "extreme" levels, will the blueprint be accessible from some of the local traders?

-Can someone else, say a friend, bring a TM to the planet, or the TM blueprint, and trade/give it to me?

-Are there local, rare events that enables a "bypass" of the Awakenings questline, making the TM or TM blueprint suddenly available?

Let me just say that I'm fully aware of how it's supposed to be done by following the Awakenings questline. But as stated above, I really don't wish to leave my planet and that questline requires me to.

If you're insisting on not following the main storyline at all, or delaying as long as possible, then it may be possible but likely mostly up to chance and the random generation of your planet.

Minor settlements will often (possibly always) have a multi-tool you can purchase, which may have the terrain manipulator mod installed. In new game I started after the Beyond upgrade was released, I found a minor settlement that had a B-class mmulti-tool available for purchase that had both the terrain manipulator and geo cannon pre-installed. While this wasn't on my first planet, it was in my first solar system, so possibly you could find one on your first planet since these seem to be randomly seeded. 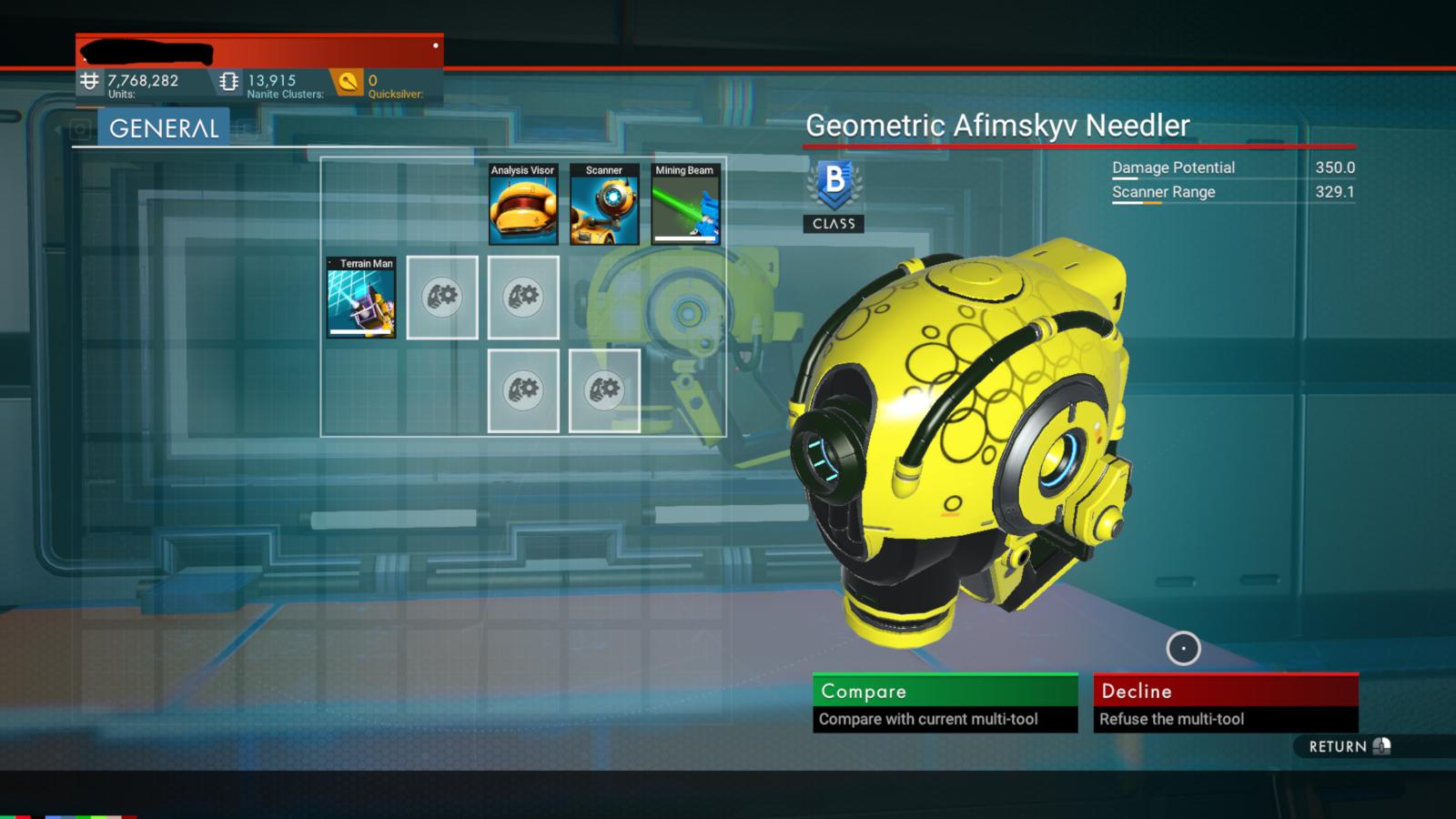 Multi-tool for sale in minor settlement. Terrain Manipulator is attached, left-most mod on the second row. (Click for larger.)

Alternatively, minor settlements may occasionally yield an alien who will reward you with a multi-tool upgrade after you succeed in interacting with it. While I haven't gotten a terrain manipulator in that fashion, I have gotten some S- and A-class upgrades. I think these are also randomly selected so it might be possible to get in this fashion.

And, finally, some minor settlement aliens may actually give you an entirely new multi-tool -- there will be a dialog option something along the lines of "accept multi-tool" or something like that. The multi-tool you get will usually have damaged slots and some combination of pre-installed tech. Usually this interaction will also change your standing with the local species as well, either for better or for worse, depending on the scenario.

Of course, if you don't mind following at least some of the main storyline, the Beyond update made major changes to the introductory primary quest "Awakenings". This quest will now walk you through establishing your base before ever leaving your first planet; since this requires chromatic metal, you will be guided to the blueprint for the terrain manipulator along the way.

Note that the wiki page indicates that you will be directed to a neighboring planet for the terrain manipulator blueprint. I wasn't; not sure if that was a glitch. It might be random, given the other answer here, but it might also be an error on the wiki page.

(If you started your game before the Beyond update, I'm not sure how the changed 'Awakenings' quest line might affect you if you had already done that quest prior to the update. My pre-Beyond save file was severely glitched by the update so I just started a new game instead.)

I have just started a new game and the terrain manipulator is now a part of the main quest and you get it on the first planet.

9
Who can see a new name of the planet?
14
Is it possible to find a crashed ship before first visiting a Transmission Tower?
7
Is there a way to specify the amount of an item I want to sell without having to hold the mouse button down?
8
Is Planet-side navigation in No Man's Sky actually like traversing the surface of a sphere?
4
How do I visit the "Marked Planet" in Community Research?
5
Is system/planet/etc naming based on first to discover or first to upload?