Why isn't parental controls blocking gameplay on days it should be blocked?

Tl;dr: I'm looking for instructions for/how to fix the Xbox One parental controls setup to make that my kid require to ask for more screen time rather than setting a time limit / schedule allowed time.

I don't know how but all the members of my Microsoft Live Family were removed, so this Monday I added them again, and repeated the procedure to setup the parental control on the console including locking the creation of new accounts and setting up a guest key.

The setup for yesterday (Tuesday, as well as other days of the week) was blocked the whole day and I was expecting that my kid send me a "more screen time" request but they were able to play without sending it.

How do I fix this?

The following screenshot was taken from the Screen Time Settings for my kid on the web. 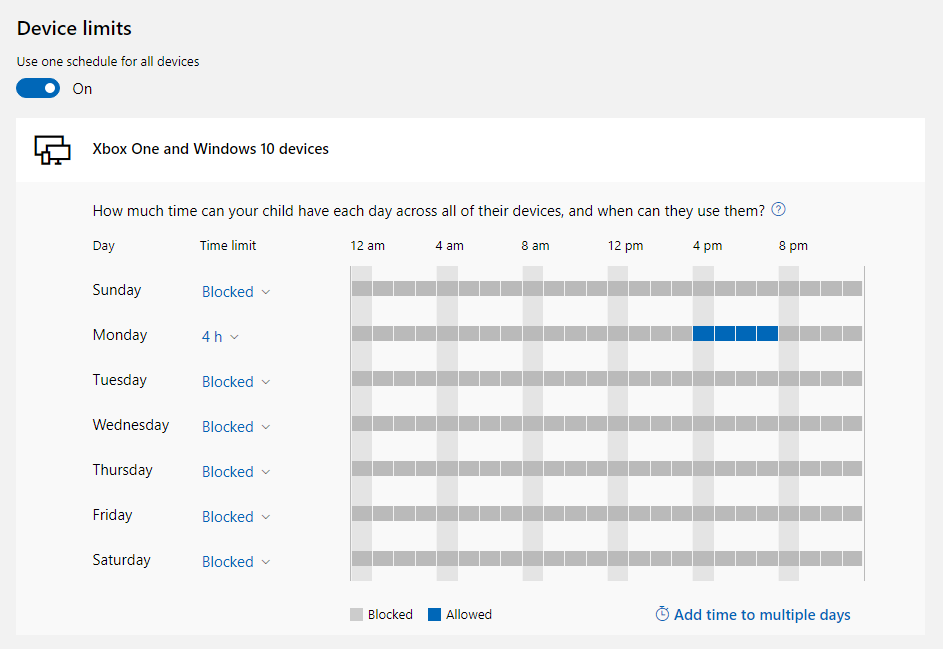 On the family there are other two child accounts with the exact same settings. On the console my account is set to require a password / access key to join.

I already tried to fix this by changing from "Blocked" to "Max Schedule" but that didn't work either.

Today (Friday, September 6), while my kid is at school, it's working fine. Maybe there was a failure on the Microsoft side and someway it was fixed. Anyway, I will keep the console controls away my kid at study / rest time, at least until this works as expected for a while.

Maybe I forgot to sign-out and my kid used my account to change the settings.

4 things could have happened

I just did this

In the Xbox One console

Later this night I will change my Microsoft account password and later this week I will "audit" the Xbox One console settings.

Not the answer you're looking for? Browse other questions tagged xbox-one xbox-live or ask your own question.

9
Convert an XBox Live account to a child account?
3
Xbox Live Family Pack on multiple consoles
3
So what's the catch with XBox live family memberships?
1
How do I set up split-screen with guest account on Gears of War Ultimate?
3
Kids cannot access gold content with Xbox Live Gold Sharing
3
How can I set up Xbox One parental controls?
4
XBOX One - Microsoft Family Accounts
10
Ask for pin when switching profiles on XBox-one?
0
Can Microsoft wipe Xbox cloud saves due to inactivity?