How does Squirt's Necklace work?

The new squirts necklace has an effect that boosts your damage 'while not taking damage'.

I've noticed that sometimes the effect stays even though I am taking damage, and other times, while I'm taking no damage (such as under the effect of a shield pylon), it still gets removed.

What exactly counts as taking damage or not? 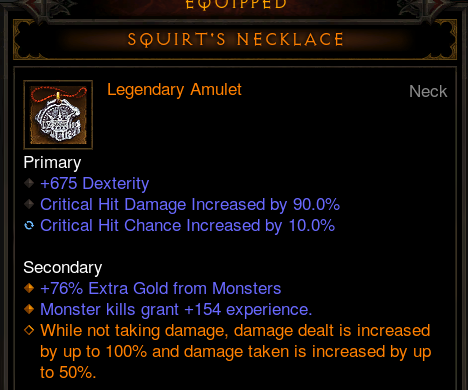 Taking damagein case of the Squirt's Necklace is an event, where you lose HitPoints due to an attack, skill or effect of an enemy as well as after death effects.

You can therefore count in ground effects and damage through map objects. You see you most likely take damage rather frequently and need 10 seconds to reach the full buff effect again (aka 10 stacks).

The only exception to taking HitPoint damage is self-inflicted damage like f.e. necromancer skills that cost life.

Losing this effect under the effect of a shielding pylon is a known bug, sadly, and still not yet fixed.

Keep in mind, that you don't lose the buff while taking damage, but rather when you lose any HitPoints. Because of this it is f.e. on wizard a strategy to focus on shielding your life pool, since absorbed damage does not count towards taking HitPoint damage.

Damage instances that you dodge also don't remove the effect of squirt's.

Hope this somewhat clears things up for you. Good loot and useful primals!

From personal testing I have found that the frozen affix from elites will cause the buff to vanish. Looking at the diablo bug page here shows that some other things will cause it to vanish as well (they mention possibly poisonous clouds from when accursed die and the trails anarchs leave when they charge). I only personally tested the frozen however.

12
What are the special effects for each damage type, and when do they trigger?
11
What is the benefit of shields with Demon Hunters?
0
Where can I find Squirt's Necklace?
4
Shield effect on Mantra of Healing?
10
How do you avoid Belial's slam attacks?
7
Does a weapon's "bleed" affix stack with the Barbarian skill "Rend"?
10
How does Frozen Orb work?
1
Does Essence Burn include the explosion damage from Exploding Palm?
8
Which monsters are immune to Black Hole's vortex?
4
What statuses count as control-impairing effects?