How does slash/blunt damage work?

All weapons in the "Kingdom come: Deliverance" have three damage stats: stab damage, slash damage and the blunt damage. The stabbing attack is performed with a different button than the slashing one, so there is no confusion between those two.

Quite obviously, swords deal lots of slashing damage while maces do a lot of blunt one, while axes do a bit of both: 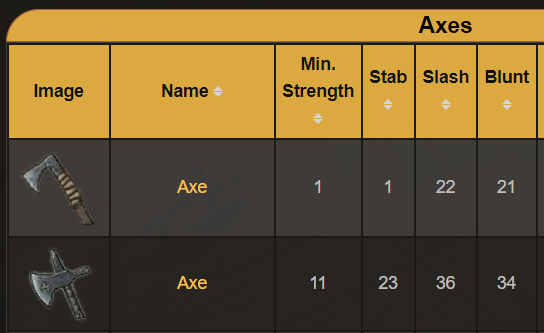 But if a weapon (such as an axe) does "22 slash" and "21 blunt" - does it mean it deals both of this damage types on a successful swing?

I've seen a few answers suggesting that the blunt damage is dealt only when you attack with a blunt part of the weapon - in case of swords, you can see an occasional animation (during a perfect block) involving an attack with the hilt of the sword. But to my best knowledge, there is no such attack animation for an axe* or animation showing attack with a sharp (?!!) part of the mace.

So, the question is: is blunt and slashing damage calculated at the same time on a regular swing?

There are three different types of attack, each making the most use of a different damage type. Additionally, each piece of armour has three different armour ratings, to counter those damage types.
Even though the linked video shows a mace for demonstrating the blunt damage and a sword for both slash and stab attacks, the point is that each damage type has its ideal use:

Nonetheless, although yielding several threads, your question of whether the different attacks exclusively deal their respective damage types remains unanswered.
Here are some interpretations (respectively):

Until the underlying calculations are published or found and explained, it seems this is the best answer you will get (as in: an inconclusive one - not my answer in particular).
In the end, I would proffer, it doesn't matter that much, since you need to choose your weapon based on the armour of your adversary - and there are weapons that work well overall (like the spiked War Axe).

Based on Joachim’s excellent answer/summary of what’s known about damage and defence in this game, and considering that each armor piece provides a given amount of Blunt/Slash/Stab protection, I believe the damage formula can be summed up as follows :

That means the weapons in the question would deal the following damage (vs an unarmored opponent) :

Not the answer you're looking for? Browse other questions tagged kingdom-come-deliverance or ask your own question.

4
What does Milan's key open?
4
How to remove splash screen / logos when the game starts
3
Alchemy: How to Brew Potions and Use the Alchemy Bench
7
How to know when to pickpocket?
4
How do I get the scribe to teach me reading in Rattay?
2
Will the disguise created during Masquerade work for Viper's Nest?
0
How do you reload the latest save game in Kingdom Come: Deliverance?
1
Does anyone have a list of areas with cooking stations?
4
How much money do you need to start rebuilding the village?
2
How does interlocutor skill affect dialogue