What is the math behind the profile's "Fleet Power"

If you go to your "resume" or profile page you will see your stats, like so: 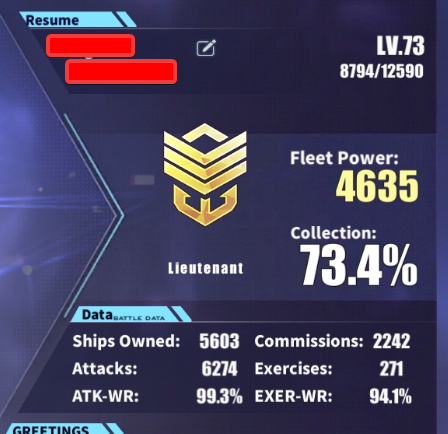 All of those stats are easy to know where the values are from, except one, the Fleet Power.

Yes, it's as simple as leveling up every ship you have and the more powerful they get this number rises. But how?

So I logged every ship's total stats value in a table (a spreadsheet to be exact) and got these stats:

None of these values are near Fleet power, the closest is Max.

How does the game determine this value?

I decided to create a new account just to have a empty dock and for easy logging of ships to calculate.

I played for a bit and got a few ships and I recorded their stats.

Now here's the problem. My Fleet Power is 417. It's below every single stats on my fleet, a complete opposite on my main account which has higher FP than the recorded stats.

I played a bit more and tried to enhance one of my ships by using some low rarity ones, I used 6 of them and recorded my ship's stats once more,

By doing so, my Fleet Power dropped to 297. Which only means, the game takes into account the number of your ships you have into calculating FP.

This time I decided to now include the levels of my ships as I think they are weighted based of that, I noticed it when responding to the comments below.

As for the upgrades/equipment, it does affect FP, for example, removing one in the highest stat ship reduces her stats by 400, and the FP reduces by 4; on the lowest stat ship, removing all of her equipment drops her stat my 200, but no effect on the FP at all

As before, I logged the data of my ships, with levels included:

I have decided to just change the ship's equipment and see the ship's stats and Fleet Power difference since its the easiest way of doing it (and I lack the in-game resources to do so). After a couple of minutes, I ended up with these stats: 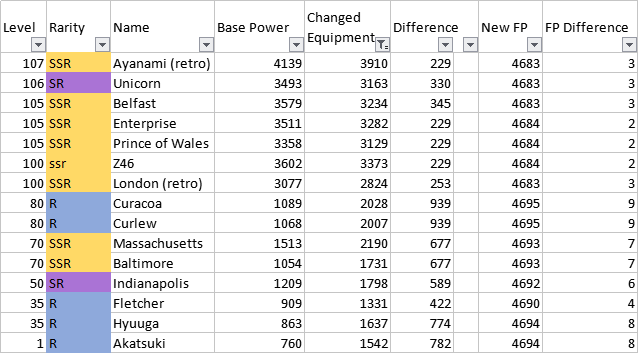 What I got with the results is the FP changes by ~1 by every ~100 change to the ship's stats regardless of level. My claim of the ships is being weighted is false.

I tried other dumb formulas to get the value near Fleet Power, which is 4686. As a disclaimer, I'm not really good at doing/finding formulas.

In the following examples, I'm going to use variables in for ease.

Now for the formulas I've tried:

The last formula is the closest for sure, but I am not satisfied by it and I haven't tested it on my other accounts due to lack of time.

If anyone would be interested to all of my data gathered for this question, here's the Google Sheets I used.

Tl;DR: The fatal flaw in your attempts to find a formula is that you assume a linear function. The function is most likely based on c * sqrt(X), where X is total stats of your fleet and c is some arbitrary constant chosen by the developer.

Long answer: I started playing less than two weeks ago, so I have a new account where I can do some low-end testing. I am currently much closer to ~1FP for every ~60 total stats; raising a ship's power by ~230 will give me 3-4 Fleet Power. On the other hand, if I look at the leaderboards, the top ranked players have only about 6x as much Fleet Power as me (12000 vs. 2000), but I'd expect their total stats to be at least 20 times as high as mine.

On a side note, moving all the gear from my strongest to my weakest destroyer (after stripping the weaker one down) had no effect on my Fleet Power. Javelin went from 3191 to 2039 Power (-1152), Cygnet went from 672 to 1824 (+1152), and my Fleet power remained at 2066. Dismissing duplicate ships has no effect, and neither does collecting or powering up Collab ships.

The obvious conclusion is that, the higher your total stats already are, the more stats you have to gain to increase your fleet power. This assumption should explain all the observations in your data, e.g. a new ship giving 6-7 Fleet Power early on and only 2 Fleet Power later on.

The developers have a simple reason for doing this: Making the leaderboards look less intimidating for new players and giving them the illusion that they might be able to catch up. On the other hand, there would be no reason for the devs to calculate all the different variables you gathered and plugging them into a formula.

This is an interesting post and I actually found it while trying to find more info on collab ships on fleet power as my testing showed they do not have any impact and based on some replies here it only confirms that. I'll have to check how it goes with the -chan ships (EDIT: -chan ships actually contribute to fleet power, just tested) but I suspect it's the same story, likely only ships that count towards fleet tech contribute to fleet power. I only realized it this collab which is kinda uh oh since I'm trying to maximize fleet power basically since the game launched (and I'm currently the #1 AL EN fleet power rank). But better late than never.

One thing I can add is that multiple copies of ship do not count at the same lb level. However different stages of LB will each contribute to FP. So to max fleet power you will need 4 copies of each ship at 4 different LB levels. In other words 11 copies of each ship (or bulin combinations), 1, 1+1, 1+2, 1+4.

Another factor that contributes to FP are the bonuses from fleet tech.

Not the answer you're looking for? Browse other questions tagged azur-lane .