Mechanics of this observer stabilizer?

It looks really attractive and efficient but also confusing to me. Could someone tell me why the second pulse is prevented from firing the piston? Thanks. 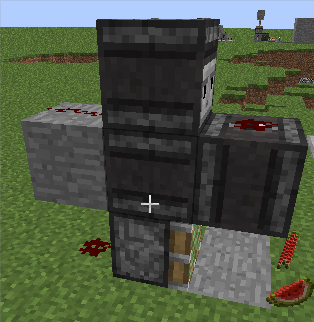 I just did some further experiments on this contraption and placed under the observer a movable block instead of the melon. Now it gets stuck in this common observer piston loop. However, the fact that the sticky piston does not abort on the falling edge of the first pulse and pulls back the stone to its original position is unexpected and attracts my attention since I assume that observers always emit pulses of 1 redstone tick length, which theoretically would result in the abortion of sticky pistons (e.g. they leave the movable block on the off pulse and retracts itself without it). Does this suggest that the observer on the top layer contribute to the extension of the first pulse to at least 1.5 redstone ticks? If so, how does that happen? I thought the two horozontally placed observers would react simultaneously.

I did not confirm this myself, but I was told that a piston takes 3 game ticks (not the 2 listed on the Minecraft wiki) to retract. If this is true, then it can't react to the second pulse in time, because it is in the process of retracting when the redstone dust turns on. On the next redstone update the dust turns off, so the piston also doesn't extend.

3
How can I detect the presence of flowing lava?
1
Observer block never working in minecraft
1
Observer behavior in Minecraft version 1.11
1
Why does this slime block auto-harvester work?
4
Minecraft 2x3 flush block swap - no observer blocks
3
Most efficient way to prevent PP updates in blocks Minecraft, to create floating sand
5
Unlock a redstone repeater after a period of time