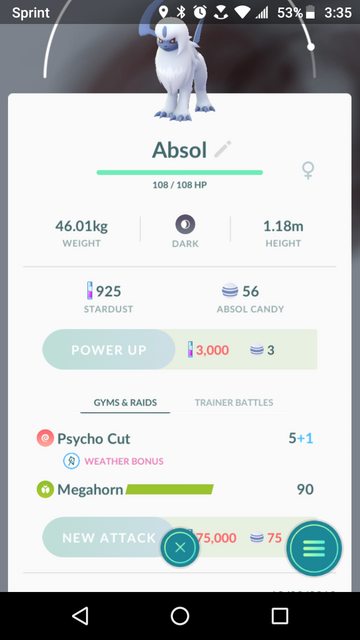 It's actually quite common to have Pokémon that has moves that would be strong against their types. I have psychic types with dark moves, normal types with fighting moves, and plenty others where this is the case.

The only case where it would be rare to have Pokémon with certain moves are legacy moves, such Gengar with Shadow Claw or Blaziken with Stone Edge. Legacy moves are moves that particular Pokémon can no longer obtain, but older Pokémon may still have these moves.

Megahorn is exactly as common as its other charge moves. Outside of legacy moves and other special cases, a Pokémon has an equal chance of knowing any one of its moves in each category when you catch/evolve it or use a TM.

The fact that Dark is weak to Bug doesn't really factor into it. The moves a Pokémon can learn are based on what moves they can learn in the main series games, which in turn are based on thematic reasons more than type-based ones. Absol can learn Megahorn because, well, it has a horn.

The developers occasionally give a nod to competitive balance when designing movesets, but for the most part type advantages don't really factor into it unless they don't make any sense at all (for example, in the main series games, Fire-type Pokémon typically can't learn most Water-type moves, but a couple can learn Scald because that makes more sense).

In Pokémon Go, each pokémon can have moves from a rather small pre-defined moveset. This is often much more restricted than the movesets pokémon have access to in the main series. The moveset Absol has access to can be found on PokémonGoHub, it consists of:

Using a quick TM, you can forget psycho cut and draw another move from the quick move pool while using a charge TM the same applies to megahorn. As far as I know, there is no preference ever given to any single move in the move pool, so using a charge TM on Absol has a 33 % chance of teaching it megahorn.

While often the typings of moves have to do with the type of the pokémon that can learn it, that is not always the case. Sometimes, none of a pokémon’s moves’ type corresponds to the typing of the pokémon itself.

While generally the move pools of pokémon remain relatively constant, Niantic has made alterations. For example, shadow ball used to be in Mewtwo’s move pool, was then removed (rendering a shadow ball Mewtwo a rare, sought after legacy pokémon) and then briefly readded to new catches. However, outside of such legacy or event moves (i.e. the special moves available on community days such as Pikachu’s surfer) there is nothing rare about individual moves.

7
What are the type elements vulnerabilities?
25
Which generation does Pokemon Go base its move type effectiveness on?
8
Should I keep Pokemon with high CP, Attack, or Weight?
3
What happens when Pokemon go types conflict with their moves
6
Pokemon Go attack bonus for two type pokemon
11
Are there unviewable flying / dark / steel type backgrounds in Pokémon Go?
6
Are Fighting-type moves viable against Snorlax?