How to understand Breath of the Wild map?

I don't understand how the map works in this game. Is there a way for me to view it in an easier format?

Is there a way to indicate if an area has mountains or other stuff from the lines shown in the map or is it just random?

The map is topographic, meaning it's a top-down view of the land, using lines (and shading) to indicate height and degrees of elevation.

Each line indicates a certain level of elevation. While this map doesn't state this anywhere, you can assume that each line is drawn at a 10m interval, for example. Therefore, using the above image, the sharp change indicates a 30m change in elevation over a short distance (left to right), whereas the slow change indicates the same change in elevation, over a much longer distance. So, the left image is indicating a cliff face, and the right image is a rolling hill. 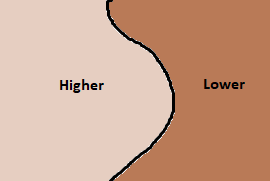 Landmarks can be identified, based on their size and shape, and colour. For example, the ocean is blue - shallow water (that you are able to walk though) is a paler shade of blue, and water that you need to swim through is a deeper shade of blue; lava is red; buildings, large landmarks (like the Bokoblin dens or Leviathan Skeletons), trees and forests are generally a flat "bushy" texture, and paths are a solid flat colour, snaking through the land. 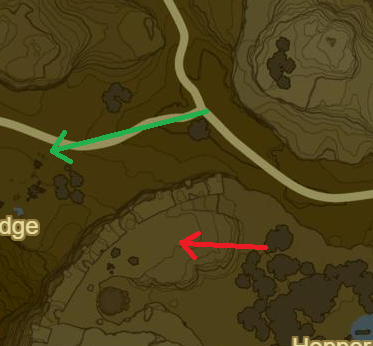 The only other primary factor for this is the map discovery. To uncover the map, you need to activate the Shiekah Towers in each region, to reveal the actual map. Locations that you dicscover will show up as icons on the map, but the background will still remain the original black and blue patterned background if you do not activate the Towers.

There is an online interactive map that you can use to compare with your own map, zoom in and move around to help you get a better understanding of where everything is, as well as quests, treasure, memories, koroks, and any other significant landmark might be.

Not the answer you're looking for? Browse other questions tagged zelda-breath-of-the-wild .