What is the difference between Steering Non-Linearity and Steering Sensitivity?

I'm confused what these two settings sliders (Steering Non-Linearity and Steering Sensitivity) actually change, and how they are different from one another: 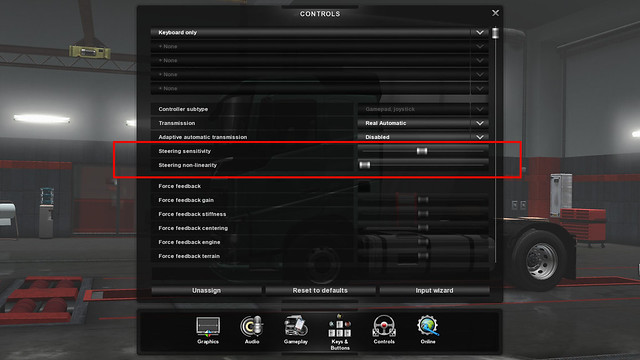 Steam Community post has a broken link to a graph. Here's source for screen-shot.

I don't mean to sound like an ass, but it sets the steering linearity. If you have a steering wheel, it means when you turn it, to what extent and how even the wheels respond in game. For example, if its set to completely linear the steering in game will turn exactly as much as you turn your gamepad / steering wheel. That means, if you turn your steering wheel irl 5 degrees, in game will turn 5 degrees. However, if its not linear it will turn less, it might only turn 3 degrees in game and then at the end of the rotation “catch up” or ”compensate” and turn very much in game for very little actual rotation on your irl wheel. I find the option helps a lot if set to non linear, especially if you have an old wheel that doesn't do 900 degrees rotation, otherwise while driving fast its very easy to accidentally turn too much.

How does this differ from Steering Sensitivity?

So steering non-linearity and sensitivity deal with different things.

Sensitivity is basically just like a multiplier on all the movement inputs. So if, for example, moving from 0° to 5° usually corresponds to a turning of 5° at default sensitivity, increasing the sensitivity would increase how much this has an effect. If you increase the sensitivity, it could make the 0° to 5° turn wind up being a 8° turn, or a 10° turn depending on the sensitivity setting.

Non-linearity changes how the sensitivity changes based on how far you turn it. For example, lets say we're using the default sensitivity, where turning from 0° to 5° turns the car 5° in game (hypothetically, I don't know the real in game values). If the turning was completely linear, turning the wheel from 5° to 10° would also cause the tires to rotate an additional 5°.

If the steering were non-linear, going from 0° to 5° might give a 5° turn in game; but going from 5° to 10° might give you an 8° turn. In otherwords, non-linear behaviour means that the sensitivity to movement actually changes based on the position of the controller. Typically, the further you are away from the default position, the more sensitive it becomes.

This is similar to having a "deadzone" where your small natural movements of the controller don't lead to any actual movement in game. By reducing the sensitivity at the lower movement levels, it can prevent accidental large actions caused by slight movement of the controls.

Another way to put it is that using a non-linear scheme, moving the wheel a bit is less sensitive and allows for easier fine precision movement; while you are still able to turn the wheel a greater amount when you need to make big turns and less fine movements.

I've drawn these (professional quality) graphs to illustrate what I am trying to say: 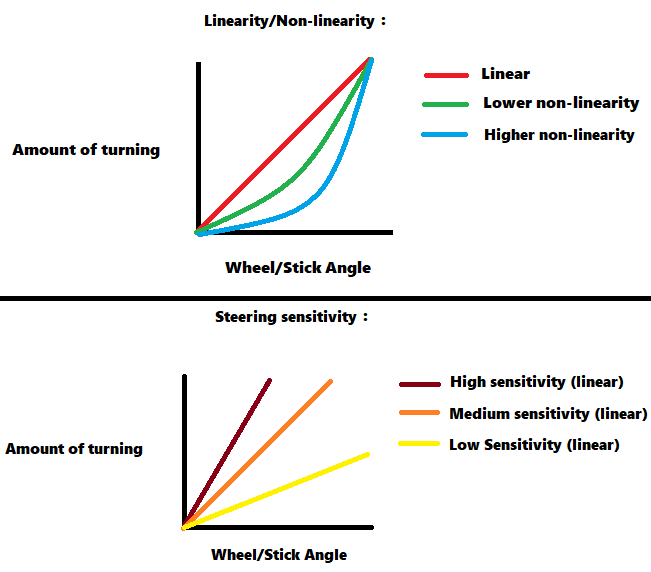 Now obviously the exact shapes of these curves will depend on the specifics of the game you are playing, and what I've drawn probably isn't a real representation of any game, but hopefully this illustrates the concept.

Not the answer you're looking for? Browse other questions tagged american-truck-simulator or ask your own question.

0
What combination of Steering Sensitivity and Non-linearity minimizes turning during straight-line 140 kph driving?