How does Surf crit in a multi-battle?

(Or any other Wide Ranging attack, for that matter)

Answers from any generation welcome, but Sword & Shield preferred - this might change between generations!

(Inspired by this question)

Also, there are some moves which have high critical chances, all of them can only target a single Pokémon except Razor Leaf, which is a Grass-type physical move since Gen 1 (base power : 55, accuracy 95%, hits all adjacent enemies in double and triple battles, but not allies); thanks to @Zoma who mentioned it.

You can find more information on Bulbapedia's page on critical hits.

NB : If you have a Kingler with ability Shell Armor poisoned against a Toxapex with Merciless, the Shell Armor takes precedence and no critical hit happens. (here is a screenshot of a simulation done on pokemonshowdown to confirm this): 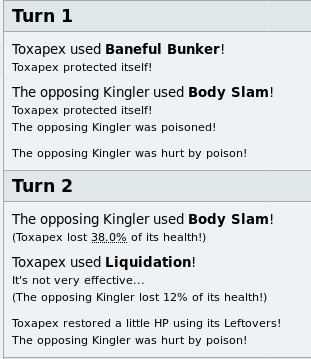 As you can see, no critical hit was landed.

Each target can individually suffer a critical hit. This goes for moves that only hit opponents like Heat Wave, moves that hit everyone else on the field like Explosion, and moves that hit multiple times like Dragon Darts.

7
How does the new move “Foul Play” work?
4
What's the optimal strategy for the first Pokémon battle?
7
How does my Trainer ID effect shiny Pokemon?
3
Do multi-target moves get stronger against a single target?
2
How does boosted exp. work?
15
How does confusion work in Pokemon?
3
Does the Technician ability activate if a move's overall power is reduced due to battle type?
2
Does MissingNo exist 'canonically'?
2
Does Guard Spec. affect accuracy?