This may be a long shot but I have to ask: Can you go into the new austin lands in red dead redemption 2 if you're wanted dead or alive?

Yes you can, but you will be hunted by hard hitting massive damage shooting law men. But I wonder if they ever let up.

I want to get an iguana skin early on in the game. Apparently I have to get to the lower region of the new austin lands but i am wanted dead or alive and they just come out of the wood work all the time and it is very hard to find desert land no matter how hard I try. I am pretty far maxed on most of my cores but the issue is that in the long run I stand no chance against a crew of lawmen constantly hunting me down relentlessly. I can handle my own for the most part but holy hell they are a tough crowd.

Is there any protection, be it special items, preparation, weird tactics, or whatever that will give me a chance at all? Or do I have to play the game until I can go there without the dead or alive flag?

What have I tried? Tons of tonics, chewing tobacco, max special ammo, hitting dead eye as soon as they appear and fighting them off, etc. It's all good but eventually they will get me. So I wonder if they ever stop or is it just total end game even trying?

The data: They all hit hard. Every shot I take is like 15 to 20 percent life. I can gun them down for the most part but inevitably I hit a rock or tree and I just get surrounded and they will kill me. I have multiple save points to prevent catastrophe, but that's not enough. I need a trick. Do I leave one alive to prevent a new group from spawning and just hope I can keep the last one far enough away to not get picked off eventually? Do I find a special outfit or trinket that gives me a weird unfair advantage? Or is it just hopeless? I have the special white horse, maxed lancaster repeater and slug punp shotgun, all maxed tonics and special perk items that refill life and dead eye, stamina for me and the horse, and I am just plain unstoppable to most every other gun fight the game can throw at me. But for the life of me I can't get to the desert while wanted dead or alive in new austin.

I get it though, the game has to limit you in a sandbox world. But surely someone has found a way or determined that it is just plain impossible. I'm looking for the loophole. I'm on PS4. I think chapter 2 where I am camped at the shores in leymoyne, and I am at level 8 dead eye, plus just about max on stamina and health. I am a pretty formidable opponent. Just not enough.

So does anyone know if it can be done? Have you done it? Or is it a fool's hope? I'll consider anything but I would prefer it wasn't an outright exploit like some weird hack that makes me invincible. Worst case it can't be done and I just have to play the game until I can go there safely. I'm not even impatient. I just got to a point where I need a perfect iguana skin early enough where it is not possible in the upper region of the map. I'm all for the challenge, but holy cow this one has me licked.

The general consensus is that you cannot get past Blackwater early.

Lawmen will pursue you relentlessly into New Austin and with the desert terrain and virtually no cover it'll be an impossible fight. You cannot survive indefinitely in New Austin as you will be unable to replenish supplies fast enough to fend of the waves of enemies.

There is almost no chance of hunting either as the gunfighting will scare off prey and make it difficult to focus on tracking.

Because you only need an iguana skin and there isn't any other reason you mentioned to go to New Austin I'll provide you a much safer alternative to finding one. Go to Flat Iron lake near your coastal camp and hunt for iguanas on the island there. Iguanas spawn here and hunting will be drastically safer than traipsing through New Austin. 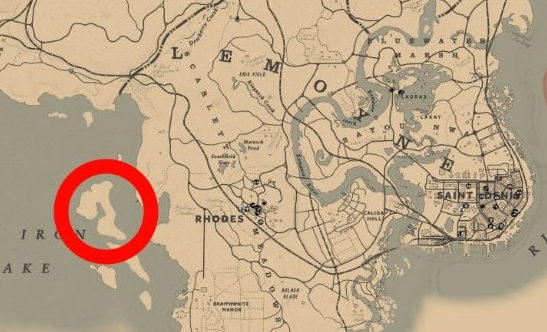 Not the answer you're looking for? Browse other questions tagged red-dead-redemption-2 or ask your own question.