Where does the game get the Unstable Rate value in osu!catch?

If you completed a beatmap, you will be presented with the results screen, and hovering on the Performance Graph will show you this: 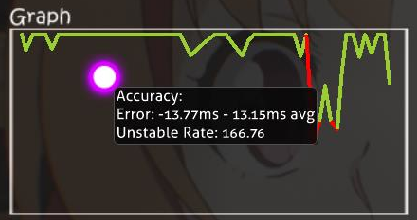 This got me thinking, osu!catch is not really a timing based game, so why does it show the unstable rate and hit error? Where does it get these values?

Unstable rate represents the consistency of the timing of the hits, where lower numbers are better (top players often score below 100). Note that the value measures consistency, not accuracy, [ ... ] The formula is essentially the standard deviation of the hit errors (in milliseconds) multiplied by 10.

The game calculates the Unstable Rate from the position of the notes' (or fruits') position upon being caught by the player (or catcher).

The notes (or fruits, will call them notes from now on) will land on the player and the game will record the position of the note based on far off the center is the note on the player.

This mechanic closely resembles the timing calculation on the other game modes, but by actually using the timing on how early/late the player hits a note. See this image of the Error meter for reference:

To see how this works, I've done some tests. I found a beatmap where all the notes are in the same place and played it.

As expected, since the notes doesn't move at all (I just stayed on one spot the entire time), I got 0 Unstable rate and 0ms Error:

I replayed the map a couple more times but this time moving to the left or to the right and not move at all and got these results:

It looks like the game treats left as a late hit (+ms) and the right as an early hit (-ms).

And finally alternating left and right between the notes:

Not the answer you're looking for? Browse other questions tagged osu .