When you walk into Solitude for the first time, there is a Nord being executed for helping Jarl Stormcloak escape.

Is it possible to save this man from being executed?

Perhaps more importantly, is it useful to save him? (Or is he scripted to die?)

Yes, you can save him, but its not useful in any way or form. He is very weak, and will die in 1 hit. As soon as you start attacking the guards, he will try to run away, causing other imperial guards in the city to take him down with 1 arrow.

If you do manage to kill the 3 guards fast enough, then you can interact with him, but there's no dialog. All he says is "hmm", "huh", "what do you want (insert race)?" etc. 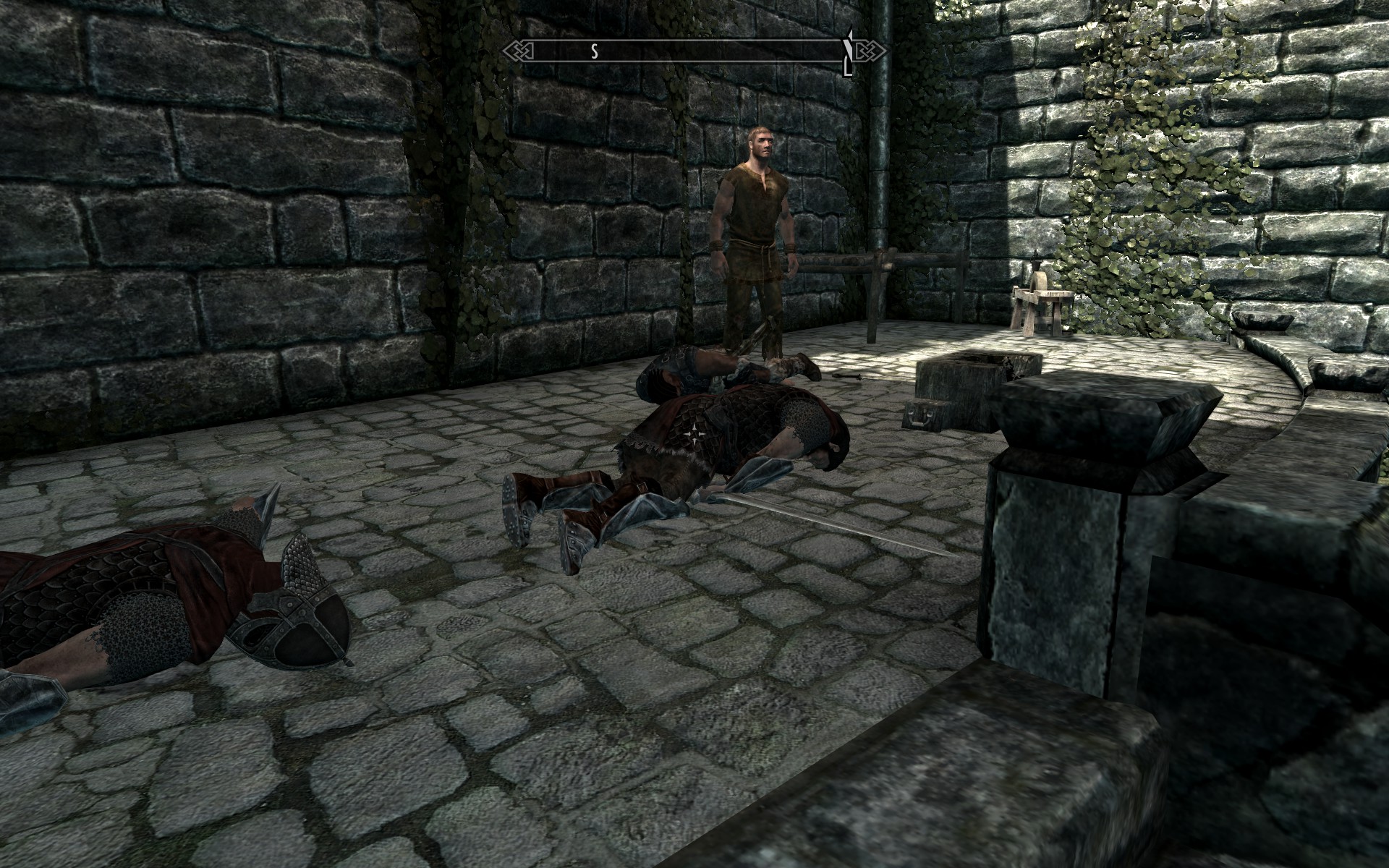 No, even if you killed the guards, the executioner, and the captain, and Roggvir survives, in a few seconds, he will die, even though no one attacked him.

Looking at the scene Captain Aldis and Ahtar will do whatever they can to kill Roggvir, but Captain Aldis will try to hit Rogvir first when you interrupt the execution. So, you first need to prevent Captain Aldis from killing Roggvir by walking over the ledge in the bottom right of yx's screenshot (this will not trigger the scene, allowing you to interrupt earlier) and simply hitting him, then hit Ahtar afterwards.

Contrary to what yx writes, I have not seen imperial guards kill him. Only Captain Aldis and Ahtar where trying to chase and kill him, my companion managed to slow them down while I was following Rogvir and he was kneeling on the stairs where I had to wait for Ahtar to actually come and kill him. This was of course not the best place as I got overwhelmed there, keeping the action near the execution place is the best you can do in order to stay alive. It requires some practice though.

Please note that you will get a 1000 gold bounty on your head for murder, given that he does nothing useful in return it is not worth it to save him from getting executed. In the end, you might even be killing two persons that might be more valuable than the one you are trying to save...

I killed all the guards around him with the help of my companion (Lydia). I started off by sniping the guy to his right before the "ceremony" began. Once he was "saved" he didn't tell me anything useful just grunts and "hmmmm?" Then, out of nowhere, he just randomly died where he stood.

Yes, but the game will kill him automatically, without reason. Try this:

It hapenns on the same way, I tried it.

I actually succeeded in saving him a few minutes ago. I used a paralyzing poison on an arrow to shoot the executioner from the steps leading up to the stage.

All the other combatants focused on me, giving Ragvirr time to escape. I followed him and watched him run in a building, then surrendered and paid the 40 gold fine.

Unfortunately, afterwards I went to speak to his family and they all acted as if he had been executed, so it seems no matter what you do, Ragvirr technically dies.

You can try and save him without getting the 1000 Gold Bounty on your head. To do so, you have to transform into Werewolf-Form, then shout so that everybody runs away scared.. If you manage not to be seen when go into Werewolf-Form or turn back to normal, no bounty will be on your head and you saved a life that day. :)

It's possible, but it's kind of useless. I glitched him and he ran off and disappeared in thin air, I'll say he's saved :D

Now I have to use the console to spawn the item I was supposed to loot.

I have tried to "save" him a number of ways. Even when he doesn't glitch and disappear, he will randomly die. I held all the guards in the hallway with him cowering behind me while I kept them knocked down with ice-storm spam, but he always dies before they are all dead. He was not hit by an arrow or my AoE.

I quickly and brutally dispatched all the guards (including the ones from upstairs who came running), the captain and the executioner, and had to repeatedly beat down the invincible Argonian NPC. As someone else here said, even if you're well equipped to do this and Roggvir lives, he returns to the execution platform and then dies from nothing at all before much more time passes.

It's a real pity. As a Stormcloak and believer in the Nords' "Old Way" which Roggvir and others profess to, I intended to put a stop to this execution even at cost of a large bounty on my head, but sadly the game scripting doesn't support what is possibly one of its biggest potential emotional hooks. Anyone who loved Braveheart and couldn't stand the ending will know what I mean.

9
What happens if I kill Imperial guards transporting a Stormcloak prisoner?

19
After I murdered/robbed people, how do I get rid of the bounty?
9
Why am I always "sneaking"?
5
Are some areas impossible to beat on Expert/Master?
8
Is there a console command to give vendors gold to help with selling?
6
Who are essential and will not attack you (purposely)?
3
When are follower levels determined?
2
My Malborn runs into a sign and disappears? Why?!
4
Skyrim Battle for Windhelm - Not Starting